As per existing rules, the three Services chiefs can serve up to the age of 62 or for three years, whichever is earlier.

NEW DELHI: The government on Sunday amended the Army Service and Tenure Rules ahead of its much-awaited announcement on the appointment of the country's first Chief of Defence Staff.

The order passed by the Defence Ministry said, ''A chief of defence staff (CDS) or tri-Service chief will be able to serve till 65. As per existing government rules, the three Service chiefs can serve up to the age of 62 or for three years, whichever is earlier.''

"Provided that the Central Government may, if considered necessary, in public interest, so to do, give extension of service to the Chief of Defence Staff, referred to in the Explanation to clause (a) of sub-rule (5), for such period or periods, as it may deem necessary subject to maximum age of 65 years," the Defence Ministry notification dated December 28 stated. 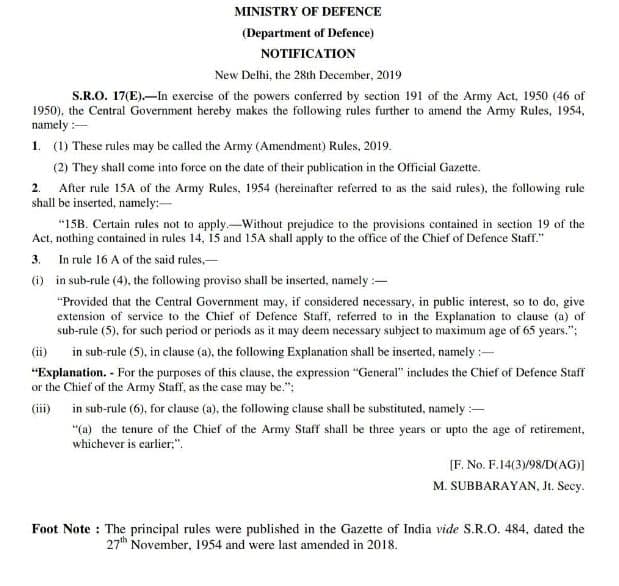 The government amending the Army Service and Tenure Rules, 1954 has given credence to reports that the ruling BJP dispensation is keen on appointing General Bipin Rawat, currently serving as Indian Army Chief, as Chief of Defence Staff after he retires on December 31.

The Union Cabinet, chaired by Prime Minister Narendra Modi, had on December 24, approved the CDS post and its charter and duties.

As per the charter of duties for the CDS, he will also be the member of the Nuclear Command Authority headed by the Prime Minister.