The helicopter can launch attacks with Shtrum missiles and rockets of different caliber, bombs & canon. 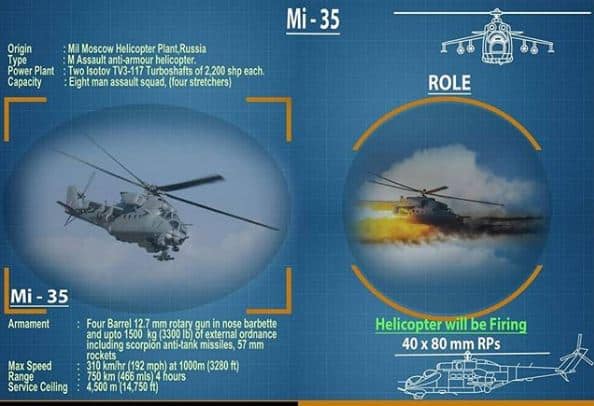 NEW DELHI: Mi-35 - the Russia-made assault anti-armour helicopter - will unleash its firepower in the upcoming Indian Air Force's (IAF) exercise 'Vayushakti 2019,'  which is due to begin from February 16..

The Mi-35 is an assault anti-armour helicopter, which can be used in numerous combat roles.

This state-of-the-art helicopter can be used in anti-tank operations, escort to Special Heliborne Operations & destruction of enemy Air Defence missions.

The helicopter can launch attacks with Shtrum missiles and rockets of different caliber, bombs & canon.

The helicopter is made by Russia and it can carry eight troops and four stretchers too.

This helicopter can fly at a maximum height of 4,500m.

The Mi-35 is a modern combat helicopter, which is also operated by the armed forces of Venezuela, Brazil, Azerbaijan, Nigeria, Kazakhstan, and Mali.

Its wingspan is of 6.5m and height is 6.5m. The take-off weight of this helicopter in ferry configuration is 12,000kg.