BJP leader and Deputy Chief Minister Sushil Modi also organised an `iftar` party in which no JD(U) leader was present. 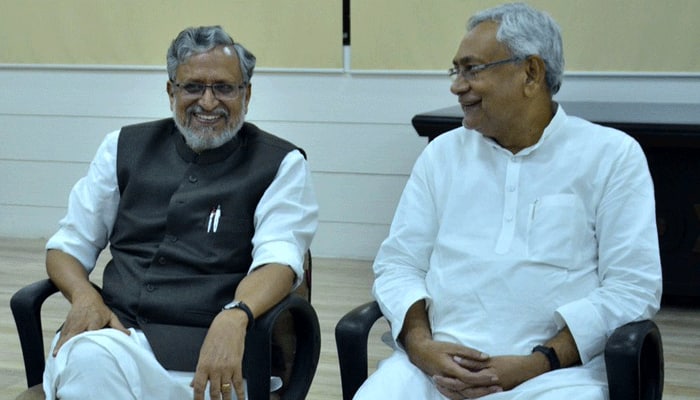 PATNA: Hours after Bihar Chief Minister Nitish Kumar expanded his Council of Ministers on Sunday, BJP and JD(U) leaders skipped the `iftar` party hosted by each other. As usual, JD(U) had organised an `iftar` party at Haj Bhavan. However, no BJP leader was present on the occasion, sources said.

Negating the claim that there is a rift between BJP and JD(U) over the allotment of only one ministerial berth in Prime Minister Narendra Modi`s new cabinet, newly-inducted minister Shyam Rajak told ANI: "National Democratic Alliance (NDA) is intact. People are merely spreading rumours."

Echoing similar sentiment, another JD (U) leader Neeraj Kumar who also took an oath on Sunday, had said: "JDU will never leave NDA. Ministry formation is the prerogative of the Chief Minister. I have performed all the responsibility given to me by my party. I am glad that Nitish Kumar chose me."

Former Bihar unit Congress chief Ashok Chaudhary, who was inducted in the cabinet today, also instated that NDA coalition is intact.The JD(U) on May 30 decided to not be a part of Prime Minister Narendra Modi`s new Cabinet, saying it would not accept the BJP`s offer of only one ministerial berth. "They (BJP) wanted only one person from JD(U) in the Cabinet. So, it would have been just symbolic participation. We informed them that we do not need it (Cabinet berth)," Kumar had said.

The JDU chief, who later attended Modi`s swearing-in ceremony, said: "It is not a big issue. We are fully in the NDA and are not upset at all. We are working together. There is no confusion." In the recently concluded Lok Sabha elections, JDU won 16 seats in Bihar, while the BJP bagged 17. Despite being a part of the NDA, the party was also not part of the last Central government. The BJP, however, is sharing power in Bihar with its leader Sushil Kumar Modi as the state`s Deputy Chief Minister.