Though the ruling Bharatiya Janata Party (BJP), which is striving to put up a good show to regain power in the state, claims that the importance of regional parties and leaders has declined of late, local political pundits beg to differ. 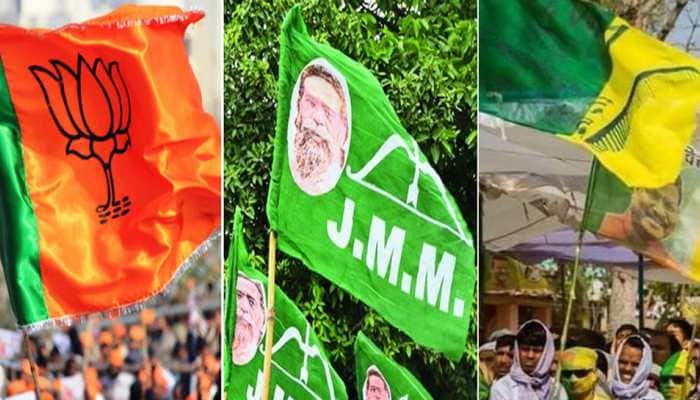 Ranchi: The regional parties have always played a key role in the eastern state of Jharkhand since it was carved out of Bihar on November 15, 2000. This time too, despite all major parties contesting the five-phased Assembly polls, regional parties are being closely watched. The first phase of voting was on November 30.

Though the ruling Bharatiya Janata Party (BJP), which is striving to put up a good show to regain power in the state, claims that the importance of regional parties and leaders has declined of late, local political pundits beg to differ.

That the BJP is putting in its best efforts and have fielded its star campaigners, including Prime Minister Narendra Modi and party chief Amit Shah, despite winning 12 of the 14 Lok Sabha seats just 7-8 months ago is enough to underline the importance of regional political forces, they say.

The two big regional parties of Jharkhand -- the All Jharkhand Students Union (AJSU) led by maverick politician and former deputy Chief Minister Sudesh Mahato and the Jharkhand Vikas Morcha (JVM) led by the first state Chief Minister Babulal Marandi -- are back in the poll rink and are going alone.

"Our alliance is with the people of Jharkhand," said AJSU spokesperson Devasharan Bhagat. That the AJSU broke the alliance with the BJP before the elections underline its confidence.

The party is eyeing support from youth and women apart from the sizeable Kurmi community, to which Sudesh Mahato, its chief belongs. The AJSU has fielded candidates in the 53 of the 81 Assembly seats.

Mahato, who lost the 2014 elections from his stronghold Silli after representing it for over 15 years, is back with full force.

Mahato has always played a key role in the formation of the government in the state, where BJP`s Raghubar Das created a record by becoming the first Chief Minister to complete the full term.

The AJSU`s key role post-elections can also be gauged from BJP President Amit Shah`s remark in Ranchi four days ago that the BJP would take the AJSU along.

The JVM of Babulal Marandi has fielded candidates in all 81 seats. It is hoping to bring back "upset voters" who went on to support the BJP in the Lok Sabha elections. Marandi formed his own party after developing differences with the BJP.

If Marandi, seen as a politician with a clean and honest image, succeeds in his goal, he too would be playing a vital role in government formation.

Jharkhand voters always made a distinction between the Lok Sabha and the Assembly elections. While in 2004, 2009 and 2014 Lok Sabha elections they gave a clear mandate, it has always been a fractured vote in the case of Assembly.

The Jharkhand Mukti Morcha (JMM), another key player, is contesting the polls in alliance with the Congress and the Rashtriya Janata Dal (RJD). The alliance has declared JMM working president Hemant Soren as its chief ministerial candidate.

Leaders of this alliance are fairly confident after the reports of dissatisfaction in the BJP ranks after ticket distribution surfaced. However, we have got to keep our fingers crossed till December 23 when the election results would be declared on December 23.