According to an analysis by the Delhi Pollution Control Committee, people in Delhi breathe the worst air between November 1 and November 15 every year. The city has recorded severe air quality on six of the last eight days after Diwali. 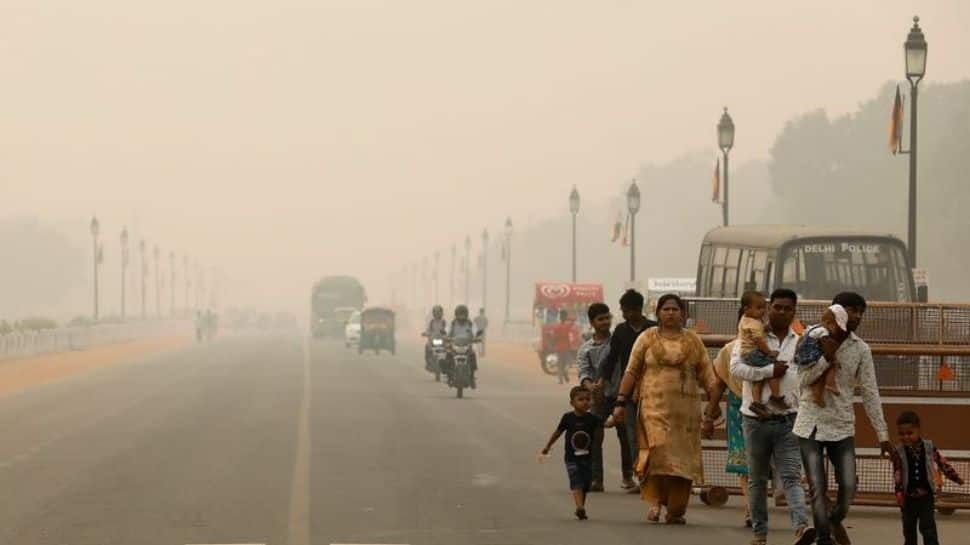 New Delhi: Authorities on Friday advised people to limit outdoor activities and told government and private offices to cut vehicle use by at least 30 per cent as air quality in Delhi-NCR inched towards the emergency level amid a rise in emissions from farm fires and unfavourable meteorological conditions.

Over 4,000 farm fires, accounting for 35 per cent of Delhi's pollution on Friday, played a major role in pushing the 24-hour average Air Quality Index (AQI) to 471 by 4 pm, the worst this season so far. It was 411 on Thursday.

A sub-committee on Graded Response Action Plan (GRAP) said meteorological conditions will be highly unfavourable for dispersion of pollutants till November 18 and agencies concerned must be fully ready to implement measures under 'emergency' category.

After reviewing the situation, the sub-committee on GRAP said, "Government and private offices and other establishments are advised to reduce vehicle usage by at least 30 per cent (by working from home, carpooling, optimising field activities etc). People are advised to limit outdoor activities and minimise their exposure.”

"Concerned agencies must be in complete readiness for implementation of measures under 'emergency' category as per GRAP (Graded Response Action Plan)," an order issued by the committee read.

The GRAP -- a set of anti-pollution measures followed in Delhi and its vicinity according to the severity of the situation comes into force in mid-October when air quality levels start worsening.

The measures to be followed in the 'emergency' situation include stopping the entry of trucks in Delhi, ban on construction activities and introducing the odd-even car rationing scheme.

According to an analysis by the Delhi Pollution Control Committee, people in Delhi breathe the worst air between November 1 and November 15 every year. The city has recorded severe air quality on six of the last eight days after Diwali.

A layer of eye-stinging smog lingering over Delhi-NCR thickened on Friday, giving an orange tint to the sun and lowering visibility to 200 metres at several places in the region.

India Meteorological Department officials said moderate fog and low temperatures in the morning -- a low of 12.6 degrees Celsius on Friday -- and calm winds have been trapping pollutants close to the ground.

"Visibility levels at the Indira Gandhi International Airport and the Safdarjung Airport dropped to 200-500 metres due to moderate fog. It intensified on Friday due to high humidity," an official said.

Green think tank Centre for Science and Environment (CSE) has said the ongoing smog episode is a public health emergency and could be the longest in four years. In another report, it said vehicles accounted for more than 50 per cent of Delhi's pollution from October 24 to November 8.

According to the Ministry of Earth Sciences' air quality forecasting agency SAFAR, stubble burning has accounted for at least 25 per cent of Delhi's PM2.5 pollution for nine days on the trot, starting November 4.

Gufran Beig, the founder project director of SAFAR, said stubble burning generally contributes to PM2.5 but this time its coarser particles in PM10 are also becoming a lead pollutant at several locations in Delhi.

"This is a new feature in the winter. This is mainly because of the particle growth mechanism due to high humidity at night and increased humidity during the day probably due to water sprinkling which increases the holding capacity of the air. Since the flow is regular, many PM2.5 particles are growing towards PM10 (sic)," he said.

The share of farm fire in Delhi's pollution had increased to 48 per cent on Sunday, the highest since November 5, 2018, when it was 58 per cent.

Last year, the share of stubble burning in Delhi's pollution had peaked at 42 per cent on November 5. In 2019, it accounted for 44 per cent of Delhi's PM2.5 pollution on November 1.

Delhi Environment Minister Gopal Rai on Friday launched the second leg of the campaign to control dust pollution. On Thursday, he had launched a month-long campaign to prevent the open burning of waste and biomass in the city.