The third day of Parliament's winter session witnessed stormy scenes on Wednesday as the opposition Congress party raised the issue of withdrawal of SPG cover to senior party leaders and the Gandhi family members - a charge rejected by the government, which said there was nothing political in it 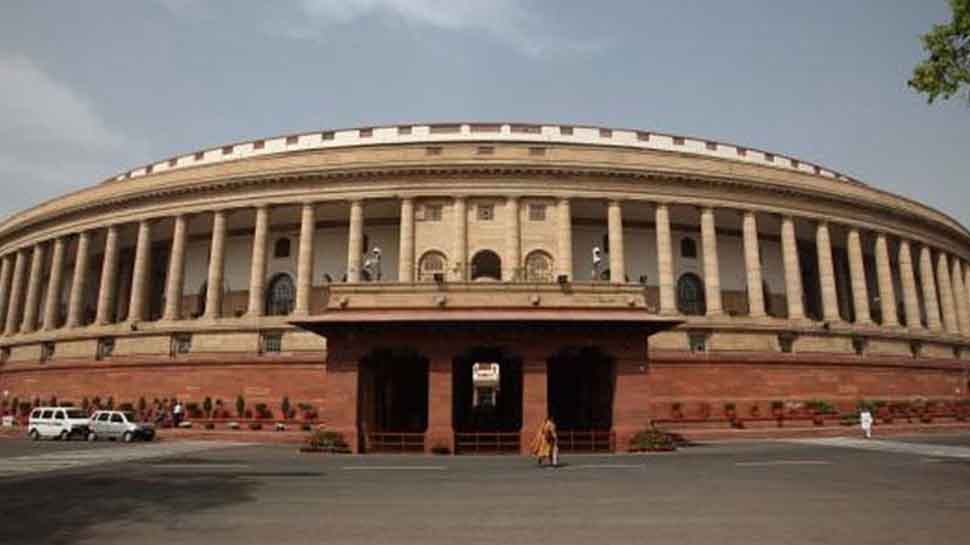 NEW DELHI: The third day of Parliament's winter session witnessed stormy scenes on Wednesday as the opposition Congress party raised the issue of withdrawal of SPG cover to senior party leaders and the Gandhi family members - a charge rejected by the government, which said there was nothing political in it. The Congress party earlier gave an adjournment motion notice in Lok Sabha over 'procurement of paddy across the nation'. Besides, Congress also called a meeting of its Lok Sabha members to discuss Parliament strategy. The meeting was presided by Congress Parliamentary Party (CPP) chairman Sonia Gandhi.

Congress wants to corner the government on issues concerning the public, economic slowdown, farmers` distress and unemployment. The party does not want to deviate from other issues that it claims are being created by the ruling party as a part of their strategy. The party also wants to raise the issue of pollution and air quality in the National Capital Region (NCR). On Tuesday, Congress initiated a debate in the House on the issue of pollution and asked the government to do something more to control the menace.

Congress has been protesting against the government on all these issues since November 5. Meanwhile, Union Home Minister Amit Shah will on Wednesday table papers in the Rajya Sabha related to Maharashtra, which has been waiting for its government formation ever since its October Assembly election. Besides, the Surrogacy Bill and Transgender Protection Bill will also come up for consideration.

Tune in to Zee News for live updates: -

Both Lok Sabha and Rajya Sabha adjourned till Thursday (November 21).

Here are the highlights of the day

Lok Sabha: Minister of State for Finance and Corporate Affairs Anurag Thakur, said, ''We will conduct more financial literacy programs just to make sure that no poor loses his hard-earned money in future.'' He further added, "I am happy that we have done a fruitful discussion on The Chit Fund (Amendment) Bill, 2019 keeping aside political grudges.''

Samajwadi Party MP Jaya Bachchan speaks on Transgender Persons (Protection of Rights) Bill says: The bill doesn't pay attention to sensitive details - a person can forcibly be made into transgender. We Can't segregate them this way.

BJP MP Rajiv Pratap Rudy speaks on Chit funds Bill in Lok Sabha, he went on to praise the Pradhan Mantri Mudra Yojana scheme and said, '' If banking services improve in our country we will not need any kind of Chit fund bill.''

On the matter of the names excluded from the final draft of the NRC in Assam, Amit Shah says, "People whose names are not in the NRC have the right to approach the tribunal...Assam govt is also ready to foot the expenses of people who can't afford a legal counsel."

Meanwhile, on the issue of data security, Union Minister Ravi Shankar Prasad says there is no plan to link Aadhaar with social media account.

NRC has no such provision which says that no other religion will be taken under NRC. All citizens of India irrespective of religion will figure in the NRC list. The NRC is different from Citizenship Amendment Bill: Amit Shah

Hindu, Buddhist, Sikh, Jain, Christian, Parsi refugees should get citizenship, that is why Citizenship Amendment Bill is needed so that these refugees who are being discriminated on basis of religion in Pakistan, Bangladesh or Afghanistan, get Indian citizenship: Amit Shah

Availability of petrol, diesel, kerosene, LPG and rice is adequate. 22 lakh metric ton apples are expected to be produced. All landlines are open in J&K, says Shah..

"Sufficient amount of medicines are available in all hospitals in the state. Mobile vans to supply medicines have also been launched in Jammu and Kashmir. There are no problems anywhere," says Home Minister.

"I want to clarify to the entire House that the situation on the ground has returned to normalcy. Daily life in J&K is back to its usual way. Transportation is back to normal. All forms of transport are working as they used to. All landlines and postpaid mobiles have started," Shah tells Upper House.

Not a single person has died in police firing since August 5 in Jammu and Kashmir, says Amit Shah.

All newspapers are in circulation, all TV channels are running and all banks are operational in Kashmir, says Home Minister Amit Shah as he refutes opposition charge of complete lockdown in the Valley.

Replying to NCP's Majeed Menon, the Home Minister says, "The situation is normal only. Schools and colleges are open, the apple industry is recovering well and normal life has resumed in every way possible in the Valley."

I agree that internet services are a necessity today...but when it comes to the question of national security, the safety of the people of J&K and our fight against terror...we need to prioritise our necessities," says Amit Shah.

No lockdown in Kashmir, internet services will be restored at right time, says Amit Shah.

J&K administration will decide on restoring internet services, says Home Minister as he briefs Rajya Sabha on the situation in Kashmir.

Union Home Minister Amit Shah arrives at Parliament. He is likely to speak in Rajya Sabha on the issue of withdrawal of SPG cover to the Gandhi family members.

Replying to Congress charge, BJP MP JP Nadda says, ''There is nothing political, security hasn't been withdrawn. Home Ministry has a very set pattern and there is a protocol. It is not done by a politician, it is done by the Home Ministry and according to the threat perception, the security is given and withdrawn.''

Congress leader Anand Sharm says, ''We urge govt that issues of security of our leaders have to be beyond partisan political considerations."

NCP chief and MP Sharad Pawar arrives at the Parliament. He will meet Prime Minister Narendra Modi at 12 pm today, over the issue of Maharashtra farmers.

Leader of Congress in Lok Sabha, Adhir Ranjan Chowdhury has given Adjournment Motion Notice in Lok Sabha, over 'purchasing of paddy from Chhattisgarh in Central Pool.

A meeting of Congress Lok Sabha MPs, to discuss Parliament strategy, is underway at the Congress parliamentary party office in Parliament. Party interim president Sonia Gandhi is chairing the meeting.

NCP chief Sharad Pawar will meet Prime Minister Narendra Modi in Parliament on Wednesday over the issue of Maharashtra farmers.

Congress party has given Adjournment motion Notice in Lok Sabha over 'procurement of paddy across the nation', reports ANI.