Tune in to the live blog of Zee News for latest updates on Winter Session of Parliament. 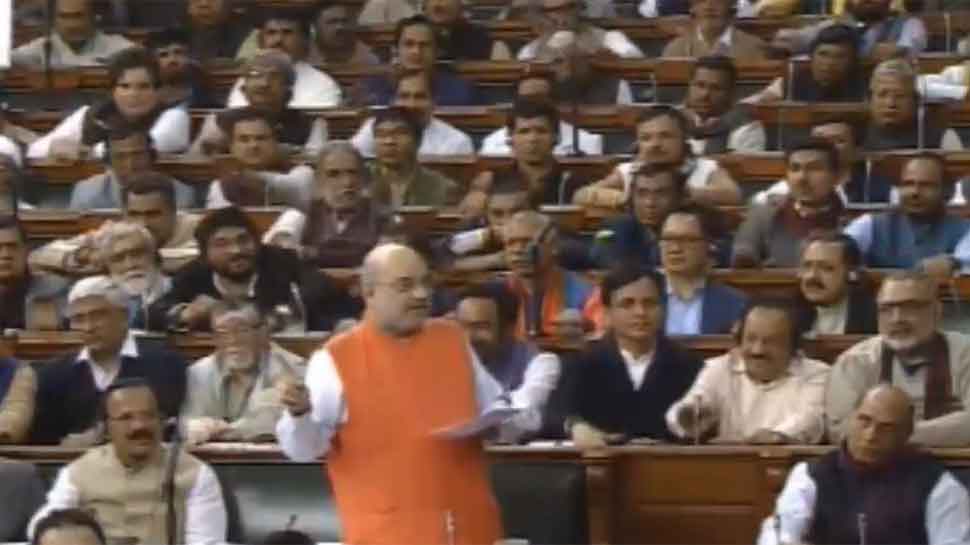 The contentious Citizenship (Amendment) bill, which seeks to grant Indian citizenship to non-Muslim refugees from Pakistan, Bangladesh and Afghanistan escaping religious persecution there, was passed in Lok Sabha on Monday with 311 MPs voting in favour and 80 against the bill, amid huge uproar from Opposition parties and protests in northeast states. BJP had issued a three-line whip to all its MPs to be present in the Parliament from December 9-11.

It will now be tabled in the Rajya Sabha to get its nod.

The controversial Citizenship (Amendment) bill aims to amend the six-decade-old Citizenship Act and provide Indian citizenship to non-Muslim refugees from Bangladesh, Afghanistan and Pakistan. As expected, Congress is leading the protest against CAB in the House as the party believes that it is in violation of the Indian Constitution, secular ethos, culture and civilisation.

Here is the highlights of all the updates on Winter Session of Parliament.

Lok Sabha passes Citizenship Amendment Bill 2019 with 311 MPs voting in favour and 80 against the bill.

The division of votes on the Citizenship (Amendment) Bill is now underway in the Lok Sabha.

Union Home Minister Amit Shah in Lok Sabha says, "There is a difference between a refugee and an infiltrator. Those who come here due to persecution, to save their religion & the honour of the women of their family, they are refugees and those who come here illegally are infiltrators."

Union Home Minister Amit Shah says in the Lok Sabha, "Pakistan occupied Kashmir (PoK) is ours, the people there are also ours. Even today, we have reserved 24 seats for them in the Jammu and Kashmir assembly."

Amit Shah says India will never accept Rohingya refugees from Myanmar. “Rohingyas will never be accepted. Myanmar is a secular country and the refugees come through Bangladesh. Talking about Indian Muslims, he said, “Indian minorities have nothing to fear. There is no discrimination against Muslims in India.”

SS Badal of SAD says on Citizenship Amendment Bill, 2019, "Why don't we add names of Muslims? There are cases of Muslims being persecuted within their religion. I'll give you an example of Ahmadiyya community in Punjab, Qadian is their HQ all over the world. They're minority Muslims in Pakistan."

Watch: Asaduddin Owaisi tearing a copy of the Citizenship (Amendment) Bill in the Lok Sabha.

After tearing a copy of Citizenship Amendment Bill, 2019 in the Lok Sabha, AIMIM leader Asaduddin Owaisi says, "Ye aur ek partition hone ja raha hai...This bill is against the Constitution of India and disrespect to our freedom fighters. I tear the bill, it is trying to divide our country."

Opposing the Citizenship bill, TMC's Abhishek Banerjee says in Lok Sabha, "Swami Vivekananda would be shell shocked if was here seeing this bill as it is against his idea of India. BJP's idea of India is divisive. It will be disastrous if we ignore words of Mahatma Gandhi and not heed the advice of Sardar Patel."

Supriya Sule of the NCP says on the Citizenship Amendment Bill, 2019 in Lok Sabha, "Entire ethos of our democracy is equality and talking about Article 14 and 15, I am not convinced by Home Minister, it will be struck down in Supreme Court. I request him to rethink of it and please withdraw the bill."

Nama Nageswara Rao of Telangana Rashtra Samithi (TRS) says in Lok Sabha against the Citizenship bill. He says, "We oppose Citizenship Amendment Bill, 2019, in line with our secular party policy. We strictly follow the provisions and spirit of the Indian Constitution."

Afzal Ansari of BSP says in Lok Sabha, "The National President of BSP, Mayawati ji, had earlier only stated that the Citizenship Amendment Bill is unconstitutional and opposed it. Today as well, we stand here against the bill."

Rajiv Ranjan Singh, belonging to the JDU says in Lok Sabha, "We support this bill. This bill should not be seen in the light of Indian citizens, both majority and minority. If persecuted minorities of Pakistan are given Indian citizenship then I think this is the right thing."

Vinayak Raut of Shiv Sena on CAB says, "How many refugees from these six communities which are mentioned in the bill are living in India? HM has not answered this, how much will our population increase when they get citizenship? Also, what about Tamils from Sri Lanka?

Midhun Reddy of YSRCP says in Lok Sabha, "We support this bill but we have certain concerns also, we expect the government to take note of our concerns. Even among Muslims, there are sects which are persecuted, we request the government to also treat them at par," in the Citizenship bill debate.

The Recycling of Ships Bill, 2019, passed in Rajya Sabha

Dayanidhi Maran of DMK says in Lok Sabha, "Probably the fear of the West, the fear of being isolated by West has crept into you and you had to include Christians in this bill. Also what about if Muslims from PoK want to come? What law do you have for that?" on Citizenship bill.

Thokchom Radheshyam Singh, Manipur Education Minister on  Citizenship Amendment Bill says, "Already, we have been informed that there is a protection clause for the state of Manipur. The clause has been assured by the Home Minister, so we need not worry. It is for the betterment of citizens."

Today Home Minister said that the Congress is responsible for the Partition on the basis of religion. I want to make it clear that the foundation for two-nation theory was laid in 1935 in Ahmedabad by Savarkar in a Hindu Mahasabha session, and not the Congress, says Manish Tewari in LS.

"This is against article 14, article 15, article 21, article 25 and 26 of the Indian constitution. This bill is unconstitutional and against the basic right of equality," says Congress leader Manish Tewari in Lok Sabha.

The Arms (Amendment) Bill, 2019 has been passed by Lok Sabha on Monday.

We are including Manipur in the Inner Line Permit system, this big issue has now been resolved. I thank PM Modi on behalf of people of Manipur for fulfilling this long-standing demand, says Amit Shah.

In 1947, all refugees which came in, all were accepted by the Indian constitution, there would hardly be any region of the country where refugees from West and East Pakistan didn't settle. From Manmohan Singh ji to LK Advani ji, all belong to this category, says Amit Shah on CAB.

On CAB, senior BJP leader Ram Madhav says, "The Opposition's interpretation of the bill is wrong. It is not a bill to exclude anyone but a bill to include some of the groups."

There will be no injustice to anyone with the bill, says Amit Shah.

In fact, millions of people are being provided with justice with the bill, he adds.

Union Home Minister Amit Shah says, "We are not discriminating against any minority. The bill is according to our manifesto."

Citizenship Amendment Bill crossed the first hurdle in Lok Sabha and was introduced with 293 votes to 82 against in the voting held in the House. A total of 293 votes were cast in favour of introduction of the bill in Lok Sabha against 82 votes.

Lok Sabha votes in favour of discussion on Citizenship Amendment Bill in Parliament.

Muslim community not named in CAB even once: Amit Shah

In Afghanistan,Pakistan and Bangladesh, Hindus, Sikhs, Buddhists, Christians, Parsis and Jains have been discriminated against. So this bill will give these persecuted people citizenship. Also, the allegation that this bill will take away rights of Muslims is wrong: Amit SHah 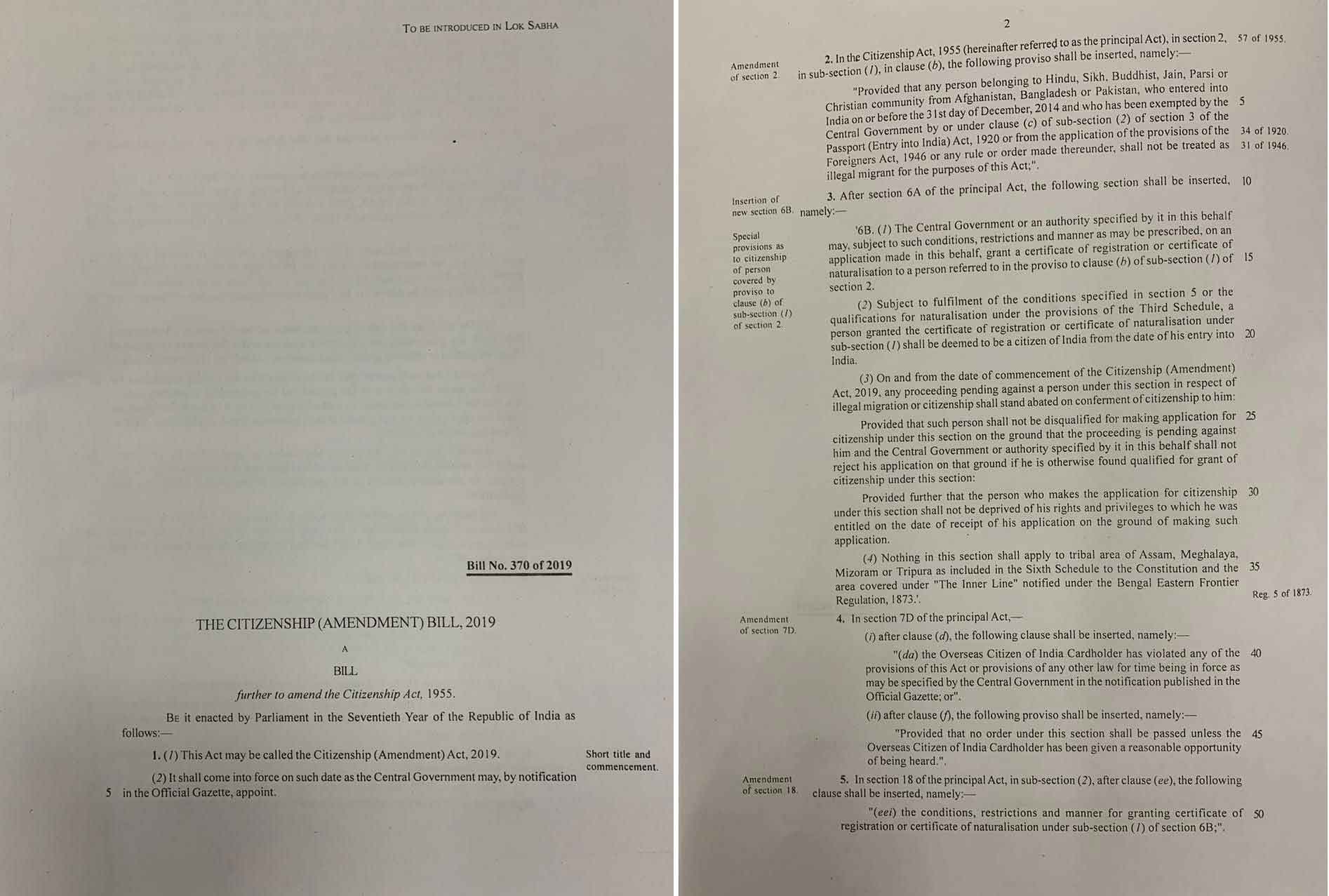 I am ready to answer every query but you should not stage a walkout, Amit Shah tells Opposition MPs shoting slogans against CAB.

Not even point zero per cent, this Bill (Citizenship Amendment Bill 2019) is not against the minorities, says Union Home Minister Amit Shah in Lok Sabha during Winter Session.

Please maintain dignity of the House. India's Parliament must be a guiding light for other parliaments, says Speaker Om Birla to Opposition MPs, raising slogans against Citizenship Amendment Bill.

BJP demands an apology from two Congress MPs for their alleged misconduct with Union Minister Smriti Irani in the House on December 6.

Samajwadi Party Chief and MP from Azamgarh (UP) Akhilesh Yadav: We are against Citizenship Amendment Bill 2019 and the party will oppose it at all costs.

Samajwadi Party Chief and MP from Azamgarh (UP) Akhilesh Yadav: We are against #CitizenshipAmendmentBill2019 and the party will oppose it at all costs. pic.twitter.com/hsv3dNksFy

Congress leader Manish Tewari in Lok Sabha during Question Hour on waiver of education loans: Unemployment rate today is at a 45-yr-old high. Given current economic slowdown. Will govt consider maintaining central database where they've info that somebody who availed education loan has got employment or not?