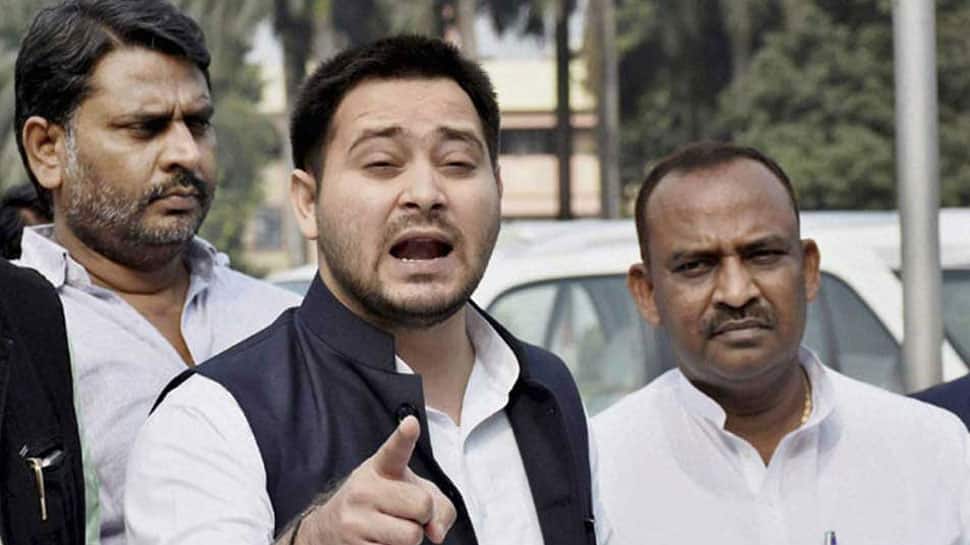 PATNA: Leader of Opposition in the Bihar Assembly, Tejashwi Prasad Yadav Thursday demanded that the call detail record (CDR) of mobile phone of Brajesh Thakur, the kingpin of Muzaffarpur shelter home sex scandal, be made public so that the other accused could be nabbed.

The RJD leader claimed that the state police had lodged FIR against accused into the incident after two months of it coming to light and that too under relatively weaker sections of the law in order to protect them.

The relevant sections of POCSO Act were added against the accused only after Supreme Courts directive, he told reporters.
Tejashwi, a former Deputy Chief Minister of the state, was speaking to the mediapersons in the assembly premises after Speaker Vijay Kumar Choudhary rejected adjournment motion of RJD legislators seeking debate on Muzaffarpur shelter home case relating to sexual abuse of more than 30 girls over a period of time.

Our adjournment motion was rejected. When I was speaking in the House, my mike was switched off. Nitish jee, such autocratic style of functioning will not last long as ultimately you will have to reply to the people, he said making a scathing attack at the state government.

"People want to know as to who is the minister, who used to visit the shelter home with a pot-bellied man sporting a moustache"? he said.

When the horror story in the Muzaffarpur shelter home had come to the surface last year, media reports quoting some sexually harassed inmates had talked about the visit of a minister with a pot-bellied man who used to sexully exploit the girls regularly.

Yadav pointed out that the former Bihar minister Manju Verma was arrested on the basis of cdr of the main accused's phone and if the cdr of his phone is made public other accused could be identified and punished.

"What happened to the victims who were brought to Madhubani shelter home from Muzaffarpur?...Where the victims vanished- nobody knows whether they were killed or alive," he asked.

After the scandal broke out, the minor girls of the Muzaffarpur shelter home were moved to a government-run house in Madhubani.

He alleged that in order to protect the accused of the shelter home case, Chief Minister Nitish Kumar and Deputy Chief Minister Sushil Kumar Modi exerted pressure on the Centre to get some senior officers of the CBI investigating the case transferred, a move that came in for criticism by the apex court.

Earlier, when the assembly met at 12 noon after a brief recess due to adjournment during question hour, speaker Vijay Kumar Choudhary rejected RJDs adjournment motion seeking a debate on Muzaffarpur shelter home scandal, saying that the motion was not as per the rules of business.

As Lalit Yadav began reading out his motion, the speaker said that he has rejected it. At this point, Tejashwi stood up from his seat and urged the chair to allow the motion as it was on a very serious issue on which the supreme court recently chided the state government.

"The CM claims that all is well when it comes to law and order situation in the state, but I want to ask some three-four questions from the chief minister as the supreme court has also expressed its concern on this," he said.

The speaker, while interrupting Tejashwi, said that you will get to speak during a debate on the third supplementary demands scheduled to be held during the post-lunch session.

But, the leader of opposition continued with his speech after which his party members trooped into the well of the house forcing the speaker to adjourn again.