Noose tightens for Chidambaram in INX media case, CBI summons him in 2 hours

The Congress leader is reportedly incommunicado and his mobile phone is switched off.

NEW DELHI: Hours after the Supreme Court rejected P Chidambaram's urgent bail plea, two separate teams of Central Bureau of Investigation (CBI) and Enforcement Directorate (ED) reached the former finance minister's residence in Delhi's Jor Bagh on Tuesday evening in connection with the INX media case. However, both the teams were unsuccessful in meeting the Congress leader who is likely to be arrested in the case.

Another CBI team came knocking at Chidambaram's door on late Tuesday night, putting up a notice outside his residence. The document summoned him to appear before the probe agency within the next two hours of the "receipt of the notice". 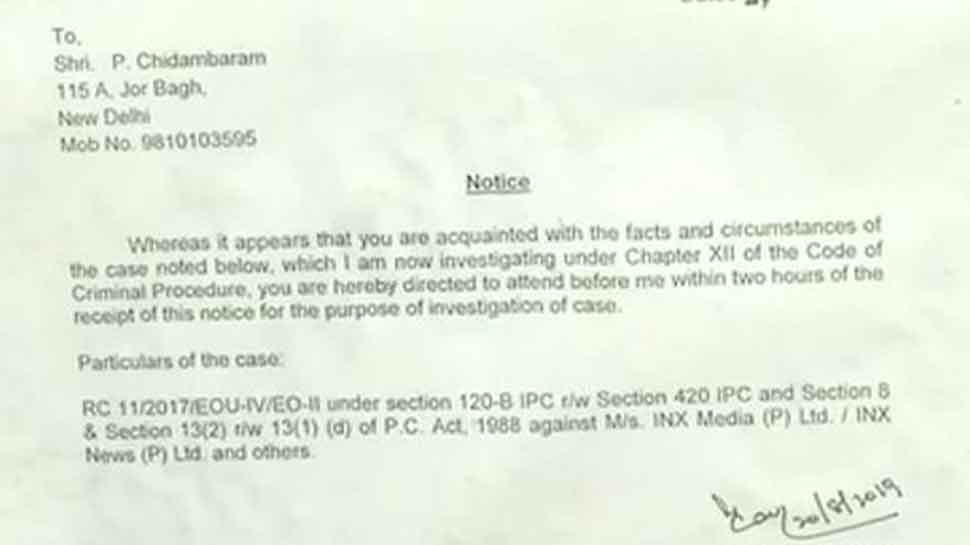 The Congress leader is reportedly incommunicado and his mobile phone is switched off, sources told Zee News.

Both the CBI and ED teams grilled the staff at Chidambaram's residence who informed that the former finance minister had not returned home after the court hearing.

The ED has also received new information on Chidambaram's wealth stashed abroad. The agency suspects the money received as a kickback in the INX Media deal was used to purchase property abroad. However, the sources via which investments were made, have not been ascertained yet.

Earlier on Tuesday, the High Court rejected the former finance minister`s anticipatory bail plea in the two cases filed by the CBI and the ED related to his alleged role in INX Media scam.

Chidambaram`s legal team consisting of top lawyers Kapil Sibal and Abhishek Manu Singhvi is likely to approach the senior-most judge of the Supreme Court on Wednesday to seek a stay of the High Court order.

Chidambaram and his son Karti Chidambaram are being probed by ED and the CBI in the INX Media case.