Defending the abrogation of Article 370, he said that it was unfortunate that the erstwhile full-fledged state, Jammu and Kashmir, was not integrated with the rest of the country. He said that earlier there must have been certain circumstances because of which Article 370 was put in place. 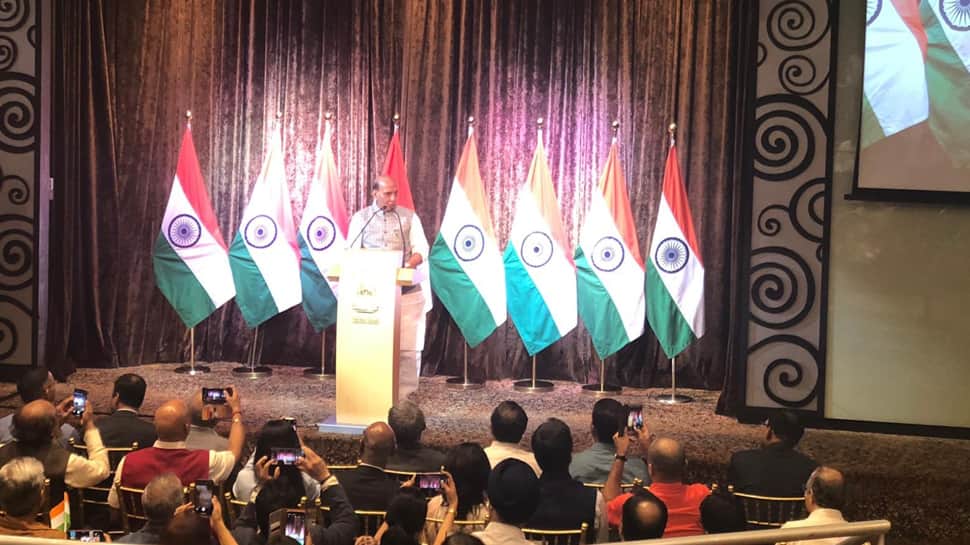 Hitting out at Pakistan, Union Defence Minister Rajnath Singh has said that the neighbouring country does not live up to the meaning of its name and keeps on doing nefarious acts. Addressing the Indian diaspora in Singapore on Tuesday, Singh said, "We have a neighbour whose name is Pakistan (land of the pure) but it keeps on doing 'na-Pak' (nefarious) acts". Singh arrived in Singapore on Monday night on a two-day visit.

Defending the abrogation of Article 370, he said that it was unfortunate that the erstwhile full-fledged state, Jammu and Kashmir, was not integrated with the rest of the country. He said that earlier there must have been certain circumstances because of which Article 370 was put in place. "Since our party was formed, we always promised and also mentioned in our election manifesto that whenever we will come to power, we will revoke Article 370 and make Jammu and Kashmir an integral part of India," the senior BJP leader said. He told the Indian community that when the BJP got a full-fledged majority, the government revoked Article 370.

Singh added that earlier, Jammu and Kashmir had different Vidhan Sabha, different flag but after the special status was scrapped all of that has ended and India is united now. "We will never compromise national interest and national pride with the political interest at any cost. Because we do politics not just to make government but to make the nation," he said.

"Security forces have been killing terrorists in the past, but it is for the first time, not only in India's history but also in the world's history that about 300-350 terrorists were killed in one go," Singh said without elaborating.

Earlier, Singh held talks with Singapore Deputy Prime Minister, Heng Swee Keat, with a focus on ramping up bilateral defence and security cooperation. He also visited the Sembawang Air Base and took a familiarisation air sortie in a Super Puma helicopter of the Republic of Singapore Air Force. He will attend the 4th India-Singapore Defence Ministers' Dialogue on Wednesday.