Another group associated with the JuD is Falah-e-Insaniat Foundation (FIF), which claims to be working as a charity organisation.

New Delhi: Under pressure to act against terror groups operating from its soil, Pakistan has once again tried to hoodwink India and the international community by some groups and not taking any steps to rein in other organisations. A Pakistani government's proscribed organisations' list includes Jaish-e-Mohammad and Lashkar-e-Taiba, but the latter's political front Jamaat-ud-Daawa (JuD) is yet to be banned although Pakistan claims the government is keeping a watch over the organisation.

Another group associated with the JuD is Falah-e-Insaniat Foundation (FIF), which claims to be working as a charity organisation, and is in the list of organisations under watch. Pakistan is yet to notify the ban even though it had issued a press statement on February 21, 2019, saying JuD and FIF have been banned. 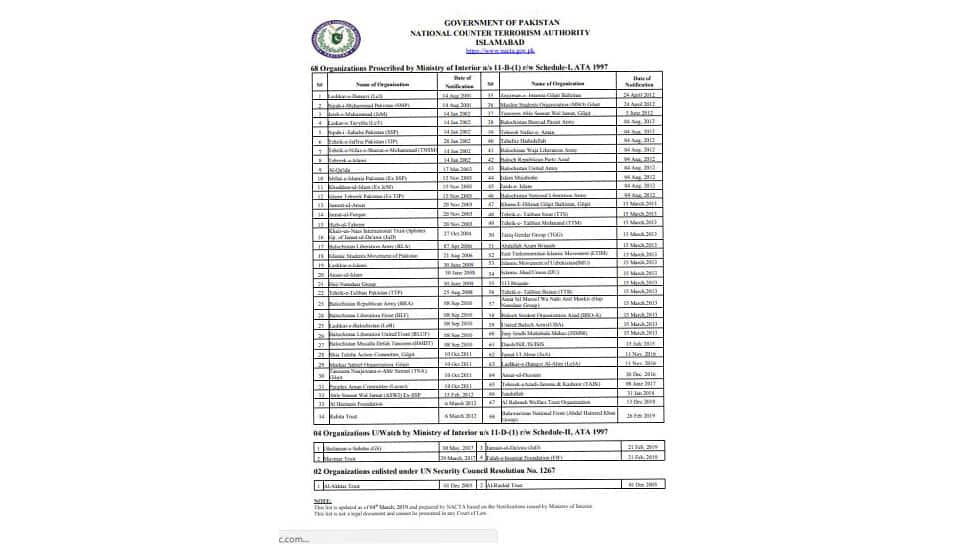 Lashkar-e-Toiba, founded by Hafiz Mohammad Saeed, has been responsible for carrying out several terror strikes against India including the 2001 Parliament attack, 2006 Mumbai local train bombings and the 26/11 Mumbai carnage. The group was helped by Jaish-e-Mohammad during the attack on Parliament on December 13, 2001. Saeed is one of the most wanted terrorists in India.

The press release dated February 21, 2019, and titled "Jammat-ut-Dawa & Falah-e-Insaniat Organizations Banned" stated "a spokesman of Ministry of Interior has said that the National Security Committee in its meeting held today at Prime Minister Office reviewed the National Action Plan in detail. It was decided during the meeting to accelerate action against proscribed organizations. It was further derided that Jamat-ut-Dawa and Falah-e-Insaniat Foundation be notified as proscribed organizations by the Ministry of Interior."

The proscribed organisations list which has been updated on March 4, 2019, includes 68 groups while four others are under watch list and two groups are enlisted under the UN Security Council Resolution No. 1267, which was adopted on October 15, 1999, and calls for a sanctions regime to cover individuals, groups and organisations associated with Al-Qaeda, Osama bin Laden and/or the Taliban.

Jaish-e-Mohammad founder and chief Maulana Masood Azhar reportedly died on March 2 at a Pakistani Army hospital in Rawalpindi. But there is no independent confirmation of Masood's death.

Indian security and intelligence agencies are keeping a close watch on the developments in Pakistan following the Indian Air Force airstrikes on JeM terror camps in Balakot and other areas on February 26. A day later Pakistani Air Force tried to attack Indian military installations in Jammu and Kashmir and in the ensuing dogfight lost one F-16 fighter. India too lost a MiG-21 Bison in the skirmish.