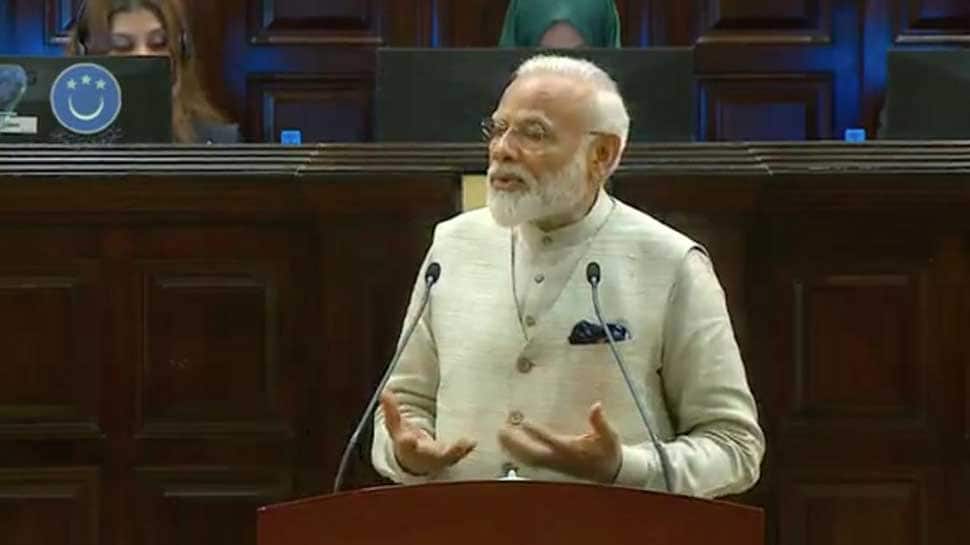 Male: Prime Minister Narendra Modi on Saturday made a veiled attack on Pakistan while addressing the Parliament of the Maldives during which he said that state-sponsored terrorism is the biggest threat today.

''Terrorism is a danger not just for a country but the entire civilization. State-sponsored terrorism is the biggest threat today. It is important for the world community to come together to fight the challenge of terrorism and radicalization,'' PM Modi said while addressing a gathering of Maldives lawmakers at its Parliament.

PM Modi at Maldives: Terrorism is a danger not just for a country but the entire civilization. State sponsored terrorism is the biggest threat today. It is important for the world community to come together to fight the challenge of terrorism and radicalization. https://t.co/L43e9GTRpb

''It's very unfortunate that people still make the mistake of distinguishing between 'good and bad' terrorists,'' PM Modi said in his address.

Highlighting the age-old ties between the two countries, PM Modi said, '''Neighborhood First' is our priority. Relations between India and Maldives are older than history. From time immemorial, blue waters have washed our shores. They have also nourished our cultures and civilisations.''

PM Modi arrived in the Indian Ocean archipelago on Saturday on his first foreign visit after re-election to strengthen the bilateral ties, reflecting the importance India attaches to its 'Neighbourhood First' policy.

After his arrival, Prime Minister Modi held wide-ranging talks with Maldivian President Ibrahim Mohamed Solih and the two countries signed six agreements to strengthen bilateral ties in a number of key areas including defence and maritime.

The first Memorandum of Understanding (MoU) was for cooperation in the fields of hydrography. Another was on health.

The other agreements included on the establishment of passenger and cargo services by sea, cooperation in customs capacity building between the Central Board of Indirect Taxes and Customs of India and the Maldives Customs Service.

An MoU was also signed between the National Centre for Good Governance, Department of Administrative Reforms and Public Grievances and Maldives Civil Service Commission on Training and Capacity Building Programme for Maldivian civil servants.

A technical agreement on sharing white shipping information between the Indian Navy and the Maldives National Defence Force was also signed.

A coastal surveillance radar system and a composite training centre for the Maldives defence forces were jointly inaugurated by the two leaders.

After the talks, Prime Minister Modi said that the focus of the various projects that India is undertaking in the Maldives is to touch the lives of people.

He said India has agreed on the construction of a Friday Mosque in the southern part of the Maldives where an urban development centre is being built.

The two countries have agreed to start a ferry service between Kochi and the Maldives, he said. Prime Minister Modi said that the launch of RuPay Card in the Maldives will give a boost to tourism in the island nation.

"There have been discussions over making the defence services stronger in the Maldives. India wants a strong relationship with the Maldives and believes that a strong and prosperous Maldives will be in the interest of the region," PM Modi said.

He said that maritime and defence ties are a top priority and the radar system will boost maritime security.

India is committed to helping the Maldives in every way possible, he added.