Even as the Rajasthan Congress Legislature Party (CLP) passed a resolution supporting the Ashok Gehlot-led government in the state, as many as 20 MLAs didn't attend the meeting held at Chief Minister's residence in Jaipur on Monday (July 13). 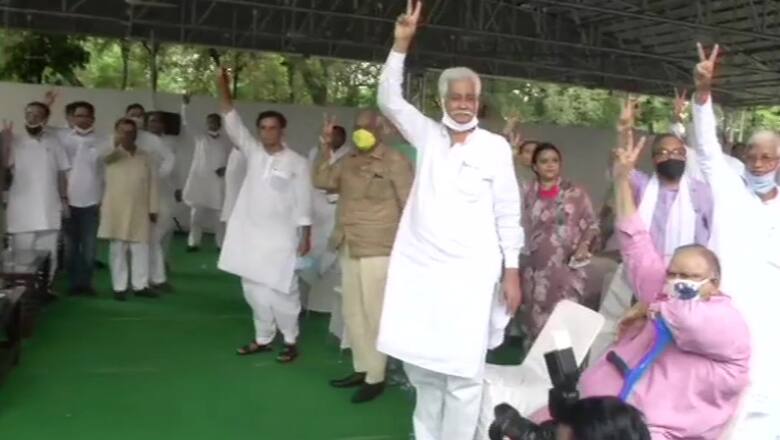 New Delhi: Even as the Rajasthan Congress Legislature Party (CLP) passed a resolution supporting the Ashok Gehlot-led government in the state, as many as 20 MLAs didn't attend the meeting held at Chief Minister's residence in Jaipur on Monday (July 13).

Sources close to Sachin Pilot told ANI that Ashok Gehlot govt doesn’t have numbers they claim, adding CM’s back garden isn't the place to prove majority, it’s done in Assembly. If they have numbers as claimed then why not do a headcount, take them to Governor instead of moving them to hotel?"

Amid ongoing tussle for power between Chief Minister Ashok Gehlot and Deputy Chief Minister Sachin Pilot, sources close to the latter further said that Pilot is not joining BJP.

The CLP resolution, however, recommended strong disciplinary action against any Congress MLA and office-bearer who "weakens" the party. Party sources claimed that 106 MLAs, both from the Congress and those supporting it, were present in the meeting.

The resolution expressed confidence in the leadership of national party president Sonia Gandhi and Rahul Gandhi and also blamed the BJP for conspiring to destablise the Congress government and "murdering democracy" with the misuse of power and money to lure MLAs.

This is an insult to eight crore people of Rajasthan, it said, and added that the Congress government led by Gehlot took revolutionary decisions in public interest in the past a year and a half and its efforts to deal with the coronavirus crisis were appreciated across the country.

After the CLP meeting was over, the MLAs were shifted to a hotel in Kukas on the Jaipur-Delhi highway. The chief minister and other leaders also went there with the MLAs.

According to sources, Rahul Gandhi, Priyanka Gandhi other senior leaders like P Chidambaram, and KC Venugopal had a word with Pilot about the situation and he has been asked to come and talk to the observers in Jaipur. Pilot, however, is yet to reply on this call.

Earlier in the day, senior Congress leader and spokesperson Randeep Singh Surjewala said that if anyone in the party is upset, they should find a solution by discussing with the members of the party, adding "If anyone is upset in the party which acts as a family, they should find a solution by sitting with members of the family...On behalf of Congress leadership, including Sonia Ji and Rahul Ji, I convey that doors of Congress party are always open for Sachin Ji or any member."

The crisis in Rajasthan Congress intensified with Ashik Gehlot and Sachin Pilot at loggerheads. While Gehlot accused the BJP of trying to destabilise the state government by poaching MLAs, Pilot is camping in Delhi and is yet to speak to the party leadership regarding the political turmoil.