Kovind suggested that parliamentarians be always "mindful" of their "oath and affirmation" and said that serving people should be our foremost priority. 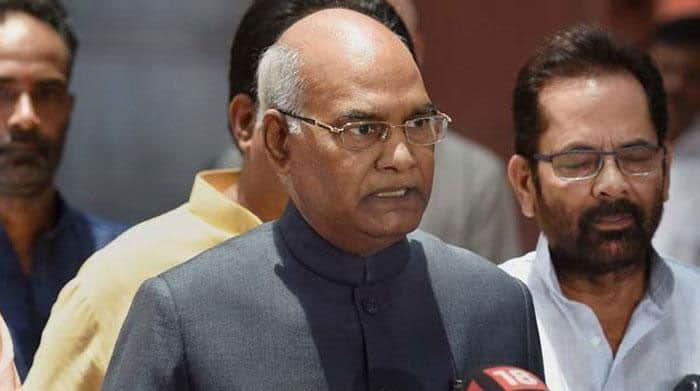 New Delhi: Mentioning that "rights and duties are the two sides of the same coin", President Ram Nath Kovind on Tuesday stressed on the need to perform our duties and create circumstances which would ensure effective protection of rights.

Kovind`s remarks came during a joint sitting on the occasion of the 70th anniversary of the adoption of the Constitution of India organised here in the Central Hall of Parliament.

"Rights and duties are two sides of the same coin. Our Constitution provides the fundamental right to freedom of speech and expression and it also enjoins upon citizens the duty to safeguard public property and to abjure violence. Therefore, if someone misconstrues the meaning of the freedom of speech and expression and is about to damage some public property, then another, who prevents him from indulging in such an act of violence and anarchy will be seen as a dutiful citizen," Kovind said.

Therefore, the President said, "we need to perform our duties and thereby create circumstances which would ensure effective protection of rights."

Addressing Parliamentarians, Kovind said developing the spirit of humanism is also a fundamental duty of citizens and that to serve with compassion towards all, is also inherent in this duty.

Mentioning one Muktaben Dagli of Gujarat, the President said: "I had the honour of conferring `Padma Shri` to Dagli at Rashtrapati Bhavan this year. Despite losing her eyesight in her childhood, she devoted her whole life to the welfare of others. She has brightened the lives of many visually impaired girls. Through her organization, she has been instilling the light of hope in the lives of numerous blind women from many states of India. Citizens like her truly uphold the ideals of our Constitution. They deserve to be called nation-builders."

Kovind suggested that parliamentarians be always "mindful" of their "oath and affirmation" and said that serving people should be our foremost priority.

"You (MPs) have taken an oath to bear true faith and allegiance to the Constitution of India as established by law and to uphold the sovereignty and integrity of the nation. As the President of India, I too have taken an oath to preserve, protect and defend the Constitution and the law to the best of my ability and devote myself to the service and well-being of the people of India."

As citizens and voters expect their representatives to work to solve issues related to their welfare and most of them never get the chance to meet their own MP, he said they, however, have regard for you as the guardians of their hopes and aspirations.

In deference to this trust and faith, Kovind said, serving the people should be our foremost priority. "It is indeed a great fortune to enter this holy temple of democracy and get an opportunity to serve the people of India."

He said that the most important objective and ideal presented to us by the Constitution is to secure to all its citizens: justice, social, economic and political and equality of status and of opportunity.

"It is only because the Constitution makers ensured equality of opportunity that I have this opportunity to address this historic sitting of Parliament as the President of India," he said.

Noting that the Constitution enshrines the ideal of building an inclusive society and also contains provisions for realizing it, the President said: "Today is a great opportunity to convey our gratitude to the makers of our Constitution who gave us a system to bring about revolutionary changes peacefully by way of constitutional amendments."

He said that it is the duty of every citizen to abide by the Constitution and respect its ideals and institutions to cherish and follow the noble ideals of our freedom struggle, to renounce practices derogatory to the dignity of women, and to value and preserve the rich heritage of our culture.

"By incorporating the provisions relating to fundamental duties into our Constitution, our Parliament has made it abundantly clear that while being alert about their rights, citizens should also be conscious of their duties. `Fundamental duties` also remind the people of their moral responsibilities."

He also appreciated all MPs for the several constitutional amendments passed during the last few years.

Referring to the constitutional avenues available to address all kinds of situations, Kovind said "whatever we do, we must first ponder whether our action is in conformity with constitutional boundaries, dignity and morality."

"I am sure that being mindful of this constitutional touchstone and consistent with our constitutional ideals, we will earn for India its rightful place in the world as an ideal democracy. Let us resolve that we, the people of India, will continuously strive to achieve the ideals of our Constitution and realize the dreams of millions of our fellow citizens."

Speaking about the 17th General Election, he said it was a glorious achievement for democracy as over 610 million people cast their votes in the election and elected 78 women members to the 17th Lok Sabha, the highest number of women MPs ever elected to this house.

"Today, all the members of the Standing Committee of Parliament on Empowerment of Women are women. This signifies an important social and political change reflective of a bright future."