PM Modi, after launching the party`s membership campaign at an event in Delhi, talked at length about the first budget of his second tenure that was presented in the Lok Sabha on July 5. 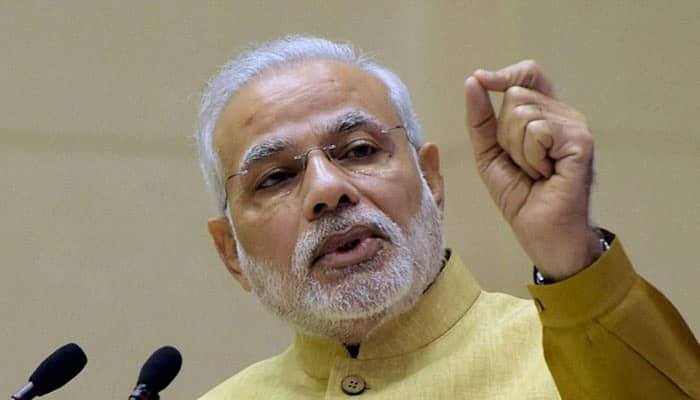 New Delhi: Prime Minister Narendra Modi on Saturday said that those casting doubt over the NDA government's target of making India a five trillion dollar economy were professional pessimists and asserted that the goal was ''achievable.''

"We are very confident about achieving the goal of 5 trillion dollar economy in the next five years but there are some who are casting doubts over the competence of Indians. They ask what the need for it and why it is being done. We can call such people professional pessimists," he said.

Prime Minister Modi, who was addressing BJP workers after launching the party`s membership campaign at an event in Delhi, talked at length about the first budget of his second tenure that was presented in the Lok Sabha by Finance Minister Nirmala Sitharaman on Friday.

He also released a toll-free mobile number 8980808080 for the membership drive and launched a tree plantation drive. The launch of the BJP`s membership drive coincides with the birth anniversary of Jana Sangh founder Syama Prasad Mookerjee.

PM Modi further said these "professional pessimists" keep grumbling about things but don't do anything to change them. "They have mastery in turning solutions into a problem. The country needs to be vigilant of these pessimists," he added.

However, the Prime Minister said that he welcomed positive criticism of his ideas, schemes, and plans to execute them. "The opinion of critics and analysts are important for us. But saying that something cannot be done or achieved is not good," he said.

He said that the new opportunities for development and dreams of 'New India' are deeply linked to the 5-trillion dollar economy. "It is about doubling the Indian economy in the next five years. The target looks difficult but can be achieved with a firm determination," he said."What does 5 trillion dollars economy mean? You all must know and tell people about it because there are some people who doubt on our will. They say we cannot achieve this target," added Modi.

Talking about the role of farmers and traders in realising the dream grand target, Prime Minister Modi said; "The Union Budget includes measures which will facilitate agriculture exports as well greater social security for small traders and firms through pensions and other benefits."

The Prime Minister said that his government has made provisions in the budget to make farming profitable and turn farmers into exporters."We have taken many decisions to ensure additional income for farmers. We look at farmers as potential exporters. The budget has focused on making an environment to export farm products. We are trying to develop a cluster so that all government departments can make export easier," he said.

The Prime Minister also read out a poem to enthuse BJP workers to work hard and spread awareness about the government`s ambitious plan. He cited the example of "bigger the cake, bigger the share" to highlight the benefits of a bigger economy to uplift the lives of the citizens.

"If a family`s income is high, its members` income will also be high. If we look at the history of developed nations, they did not have a high per capita income earlier. But these countries witnessed a period when their per capita income jumped, leapfrogging them into the club of developed nations. India can also do it, especially when it is the youngest nation of the world," he said.

Modi also emphasised the role of the blue economy, referring to resources available in the sea, and said the government has taken several initiatives in food processing and water security for sustainable economic progress of the country.

Highlighting his government`s scheme to provide housing for every citizen, Prime Minister Modi said that Rs 100 lakh crore would be invested in infrastructure development.

"Our government is focusing on the export of defence and electronic equipment," he asserted.

Backing the move to encourage adoption of electric vehicles as a clear mobility medium, PM said that India can save over Rs 5 lakh crore by reducing petroleum imports bill per year.

"The establishment of an electronic fundraising platform has been announced in the budget on the lines of the Stock Exchange. NGOs can list themselves on it and raise fund as per their needs," he said.

Prime Minister Modi urged BJP workers to reach out to every section of the society and enrol them as the party members.