"The attack was carried out by TMC workers, they carried out arson. Mamata is frustrated as she is fearing defeat. This is a step taken because of their frustration." 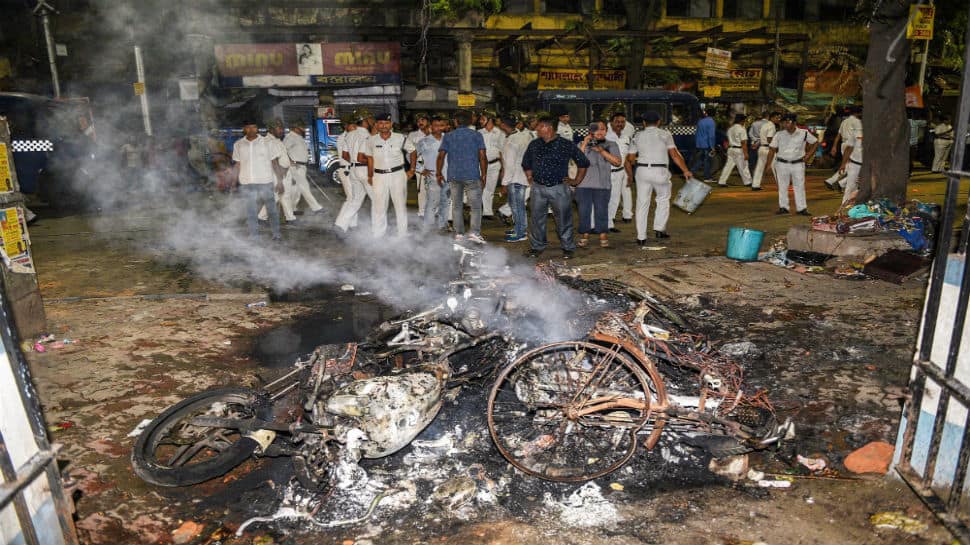 Kolkata: Amit Shah on Tuesday lashed out at Mamata Banerjee after his roadshow in Kolkata was blemished by incidents of violence.

TMC workers allegedly resorted to stone-pelting, using sticks and damaging public property in a bid to disrupt Shah's roadshow in the city. Thousands of BJP supporters had gathered along the route of the roadshow which began from Dharmatala in the afternoon. While the roadshow was largely peaceful and a show of BJP's strength, it turned chaotic by the time it reached College square. "The attack was carried out by TMC workers, they carried out arson," Shah told Zee News. "Mamata is frustrated as she is fearing defeat. This is a step taken because of their frustration."

Kolkata Police had to resort to lathi charge after TMC workers clashed with supporters of BJP. At least two vehicles were set ablaze and Shah was eventually unable to enter Swami Vivekananda's house at Simla Stree - the pre-planned culmination of BJP's roadshow here. A statue of Ishwar Chandra Vidyasagar was vandalised at Vidyasagar College as well.

It was a turbulent end to a day which had begun on a rather anarchic note with TMC workers pulling down and tearing apart BJP posters. "Mamata ji's goons and police removed all the posters and flags. They escaped soon after we reached here," Kailash Vijayvargiya, BJP national secretary, had said. He later told Zee News that BJP will complain about the violence during Shah's rally to the Election Commission.

Shah too pointed to the violence in the state of West Bengal and said that democracy must be restored here. "The people are seeing everything. They are angry with Mamata and will give her a befitting reply in Lok Sabha election."

TMC has however hit back and claimed that BJP is painting a false narrative.

Desperate BJP goons from outside Bengal smash statue of Ishwar Chandra Vidyasagar inside the college.Violent mob of BJP ‘outsiders’ in presence of Pukeworthy Shah. How little you know about Bengal, its rich history, its culture. Bengal will never forgive for what you did today. https://t.co/WrFXP6bmJl

West Bengal has seen poll-related violence in each of the six phases of voting in Lok Sabha election 2019.