Leaders across party line trained their guns on each other in a blame game over the violence. 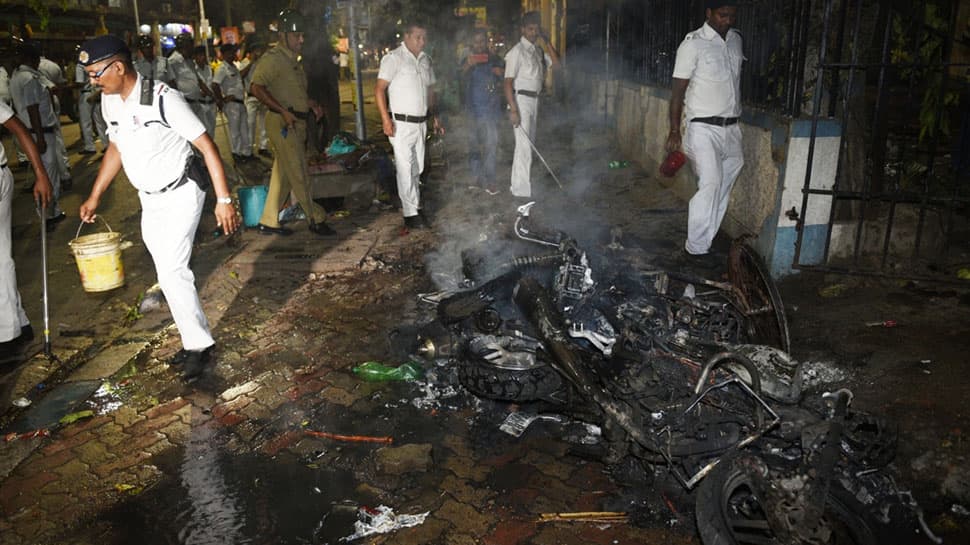 Hours after the BJP and TMC supporters on Tuesday fought pitched battles on the streets of Kolkata during a massive road show by BJP president Amit Shah, leaders across party line trained their guns on each other in a blame game over the violence.

Parts of the city plunged into a welter of violence after TMC's student wing, allegedly, waved black flags near Vidyasagar college and were also displaying anti-BJP placards. When confronted by BJP supporters, violence erupted. Stones were thrown, lathis were used and several vehicles were set on fire, even as Kolkata Police eventually resorted to lathi charge to restore order. Outside the college entrance, several motorcycles parked were vandalised and set ablaze. Shards of broken glass littered the lobby of the college.

While the BJP criticised the TMC for unleashing violence during Shah's roadshow, the TMC blamed the BJP for desecrating the statue of Bengali writer and philosopher Ishwar Chandra Vidyasagar. The Opposition leaders took a jibe at the BJP vehemently criticising the violence.

Union Finance Minister Arun Jaitley said, "Has Bengal acquired a Government of Gangsters? The attack on Amit Shah’s peaceful rally by the TMC is deplorable. Is a free & fair Poll possible in Bengal? All eyes are now on the Election Commission."

Maharashtra CM Devendra Fadnavis said, "Mamata Ji has become so scared of her defeat, that she is killing democracy and doesn't even want to let anyone campaign. I appeal Election Commission (EC) to ensure free and fair polls."

Haryana CM Manohar Lal, "Appalled by the shameful attack on @AmitShah ji's rally in Kolkata today. Does the TMC think that they are above the law? Their tactics of bullying and intimating to put fear in the minds of people will not work anymore. The citizens will give them a befitting reply soon."

Manipur CM Nongthon Biren, "The attacked at @AmitShah ji’s rally in #Kolkata deserves to be condemned. The Violence on his peaceful rally is against the principles of democracy. All the right thinking people of this democratic country should condemn on strongest terms."

CPI(M) general secretary Sitaram Yechury condemned the desecration of Vidyasagar's statue, alleging that "attacking knowledge is central to getting their poisonous project going".

"BJP-RSS think nothing of when they vandalise the historic Vidyasagar College, break Vidyasagar statue. This is their advocacy of India’s civilisational heritage? Attacking knowledge is central to getting their poisonous project going. Bengal will reject the destruction they offer. By this ugly show in the capital of Bengal, do BJP and TMC think they will win support? It is an act of desperation where they have both revealed their destructive and unacceptable agenda for Bengal. Eta cholbe na, chala uchit na. Both TMC and BJP in Bengal today are hell-bent on negating the heritage and ethos of Bengal. Vidyasagar was conferred the title of the ocean of knowledge. A leading figure in the Bengal renaissance, he stood for progress, pathbreaking reform and enlightenment. It is very clear why the Sangh parivar would seek destruction of his ideas," tweeted Yechury.

"I strongly condemn the unprecedented violence in Kolkata after the rally of the BJP President Amit Shah. The images of the destruction of the iconic Eshwar Chandra Vidya Sagar Statue will not be forgotten easily. Congress will oust the BJP on 23rd May and end the regime of hate," Congress leader Gaurav Gogoi.