The announcement was made at the DMK Headquarters in the presence of the DMK high command and Congress leaders. 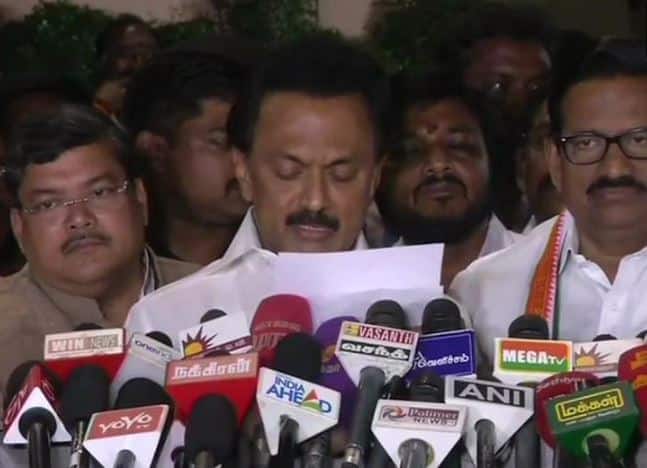 CHENNAI: A day after the AIADMK formally announced its alliance and seat-sharing pact with the BJP and PMK in Tamil Nadu, the DMK also made an official announcement of its alliance, seat-sharing pact with the Congress. DMK President MK Stalin’s proposal of Rahul Gandhi as Prime Ministerial candidate at the Karunanidhi statue unveiling in Chennai was seen as a clear indication of the reunion of the UPA allies. However, an official announcement had been pending.

The announcement was made at the DMK Headquarters in the presence of the DMK high command and Congress leaders. The DMK has allocated nine seats in Tamil Nadu and one seat in Puducherry for the Congress. However, no specific details were shared regarding the allocation of constituencies and the parties that are expected to join the alliance in the days to come.

The coming together of the DMK and Congress is happening after a brief hiatus, as they went it alone in the 2014 Lok Sabha polls. The DMK suffered one of its worst defeats in the 2014 Lok Sabha polls in Tamil Nadu, when they contested 35 seats on their own, with the remaining five being given to regional allies. The DMK had refused to have an alliance with the Congress due to the contentious Sri-Lankan Tamils issue.

In the 2014 Lok Sabha election both DMK and Congress candidates drew a blank in Tamil Nadu. It was a sweep for the Jayalalithaa-led AIADMK which swept 37 seats, and one seat each for the BJP, PMK and NR Congress. However, this election will be different for both the AIADMK and the DMK, in the absence of their respective veteran leaders Jayalalithaa and M Karunanidhi.

Parties including CPI, CPI(M), IUML, VCK are also expected to be a part of the DMK-Congress alliance. Be it the 2011 and 2016 assembly election or the 2014 Lok Sabha polls, it was the AIADMK that emerged triumphant. Hence, this time the DMK has an opportunity to ride on the anti-incumbency wave.

The Lok Sabha election dates haven’t been announced, but the battle has begun in Tamil Nadu. In the days to come, smaller parties will also finalize their negotiations and joins hands with one of the groupings.