The Election Commission of India sent notices to the Ministry of Civil Aviation and the Ministry of Railways, seeking a response on Prime Minister Narendra Modi's image seen on boarding passes and tea served in paper cups bearing 'Main bhi Chowkidar' (I am also a watchman) slogan. 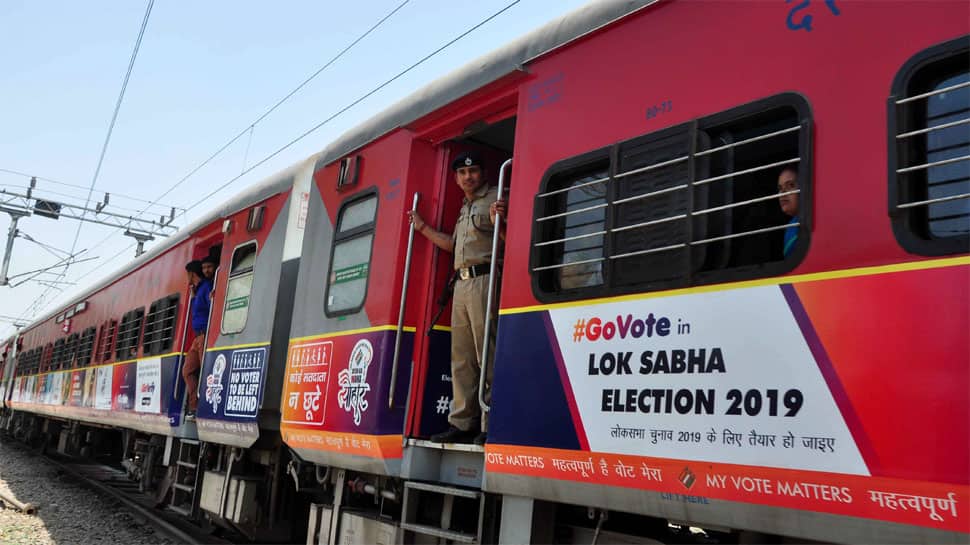 A train wrapped with vinyl wrapping on the theme of voting awareness by railways on direction of election commission of India departs from new Delhi railway station on Friday. (ANI Photo)
Share:
Written By:

NEW DELHI: The Election Commission of India sent notices to the Ministry of Civil Aviation and the Ministry of Railways, seeking a response on Prime Minister Narendra Modi's image seen on boarding passes and tea served in paper cups bearing 'Main bhi Chowkidar' (I am also a watchman) slogan.

Both the ministries have been asked to file a reply by Saturday.

A controversy broke out after plane passengers tweeted a picture of Air India boarding pass with photos of Prime Minister Narendra Modi and Gujarat Chief Minister Vijay Rupani on it on Monday, March 25. The airline was asked to discontinue the boarding passes immediately.

However, on Friday, a passenger on an Air India flight from Madurai again tweeted a picture of his boarding pass carrying photographs of PM Modi and Rupani in an advertisement for the Vibrant Gujarat summit held in January 2019, an alleged violation of poll code.

"Air India had issued notice on March 25 to all domestic stations to discontinue usage of boarding cards with Vibrant Gujarat Advertisement on reverse with immediate effect. Today's incident is apparently a human error. A show cause notice for this error has been issued to the airport manager of AI at Madurai," an airline spokesman said, as reported by news agency PTI.

"Today AI management has reiterated its earlier instructions and asked for confirmation from all stations regarding discontinuation of these boarding cards," the spokesperson added.

The second controversy emerged after passengers on Kathgodam Shatabdi train were served tea on paper cups earing 'Main bhi Chowkidar' (I am also a watchman) slogan. The Indian Railway Catering and Tourism Corporation (IRCTC) said that the cups were withdrawn immediately and Rs 1 lakh fine was imposed on the contractor. The cups also had an advertisement by Sankalp Foundation, an NGO. Reports claimed that that tea was served in these cups twice during the train journey.

The incident came days after Indian Railways was forced to withdraw tickets with photos of PM Modi printed on them.

Multiple tweets alleged that cups and boarding passes violated the Model Code of Conduct which came into effect with the announcement of Lok Sabha Election dates.

Meanwhile, the Election Commission on Friday said that PM Modi's address to the nation announcing the successful test of the anti-satellite missile (A-SAT) did not violate the model code of conduct (MCC). The poll panel said the committee received specific comments from Doordarshan and All India Radio (AIR) on the issue and while the former said the Prime Minister`s message was telecast on DD News from the feed as provided by news agency ANI, the latter responded that the audio output of DD News was used for dissemination over All India Radio Network.

The two broadcasters further said the address was not given live by them.

"The Committee has therefore, reached the conclusion that the MCC provision regarding misuse of official mass media is not attracted in the case," the poll panel said.

Field me from Mumbai north-east, I will defeat Congress-NCP: Ramdas Athawale