Schools and colleges will remain shut in Mumbai on Monday (August 5), its suburbs and smaller cities close to it as heavy showers are predicted to persist over the start of the new week. 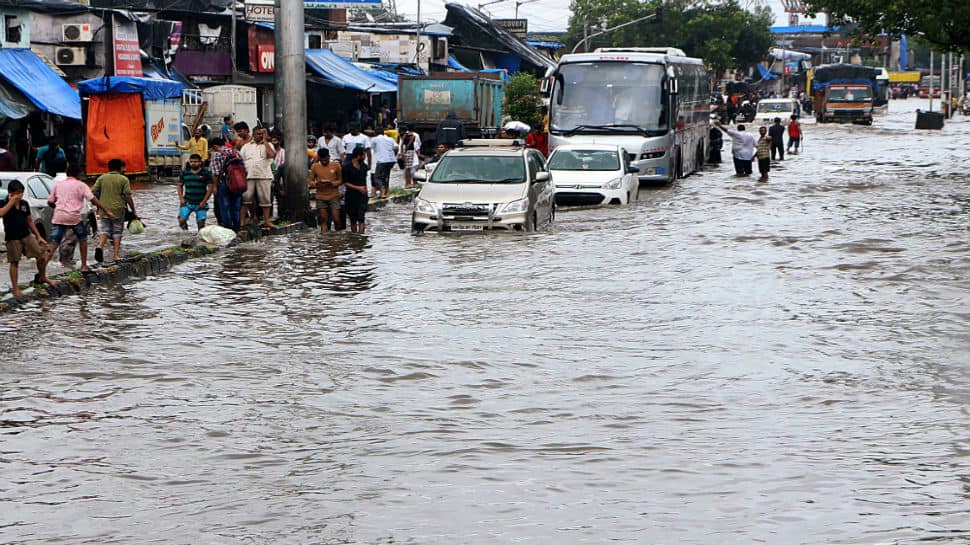 Motorists negotiate streams, not roads, on a stretch in Kurla. (ANI Photo)
Share:
Written By:

Heavy showers drenched Mumbai almost all of Sunday and there may be no respite in sight for locals here with India Meteorological Department (IMD) predicted more rain over Monday and possibly Tuesday. Schools and colleges in the city will remain shut at the start of the week and people have been advised to only venture out if absolutely essential. Maharashtra and several other states in the country too are battling against the havoc created by heavy showers, including widespread flooding.

Sunday saw dark clouds opening up and staying open across Mumbai's skies with many areas below reporting waterlogging. At least ankle-deep water was reported in areas like Nalasopara, Santacruz, Vasai, Virar, Sion, Kurla, Andheri, Malad and Vile Parle. Local train services were severely affected and many incoming trains from across Maharashtra and other states were either cancelled or diverted. Several trains have also been cancelled for Monday.

Chief Minister Devendra Fadnavis asked people to not panic and tried to reassure them by saying that his government was working closely with Brihanmumbai Municipal Corporation (BMC) to minimise problems being faced by locals in Mumbai.  He further said that as per the government’s plan, eight pumping stations are needed to ease the problem Mumbai faces due to rains. He said that five such stations are already in place while three more would be set up at the earliest. (Full report here)

Wanting to leave nothing to chance, however, the state government said that all schools in Mumbai, its suburbs, Palghar, Thane and Raigad will remain shut on Monday. Government officials have been permitted to report late at work while emergency services will be operational. An advisory too has been issued asking people at large to stay indoors unless absolutely essential.

The advisory was perhaps prompted by an unfortunate incident in which a man and a woman died due to shortcircuit in Santacruz. This was followed by a brief agitation on the Western Highway.

Emergency personnel are working overtime to relocate people and provide them with assistance. An IAF Mi17 made several sorties to relocate a total of 58 personnel, including 16 children, to safety.

Reports from elsewhere in Maharashtra are hardly bright.

The IMD has issued a 'Red Alert' for seven districts in Maharashtra - Palghar, Thane, Raigad, Nasik, Pune, and Satara. This alert is issued when very heavy to extremely heavy rainfall is predicted. "Strong winds, speed reaching 40-50 kmph, are likely to prevail over central and southwest Arabian Sea, the west-central Bay of Bengal and along and off Gujarat-Maharashtra-Goa coasts," the IMD said.

Konkan parts of Maharashtra could witness heavy showers as well and people are being asked to take every precaution possible.

Flood-like situation was witnessed in Nashik where teams of National Disaster Response Force worked round the clock to bring affected people to safer locations. Some areas saw water reaching to the first-floor of houses. In Pune, 50 patients and 120 staff had to be rescued from a hospital with many areas here grappling against water-logging.

National Disaster Response Force (NDRF): Based on assessment of evolving situation & prediction of rainfall by IMD, teams of NDRF airlifted from Vadodara, Gujarat will land in Mumbai&will be deployed in -Aurangabad, Ahmednagar, Kolhapur&Ratnagirip-districts of Maharashtra pic.twitter.com/i0EefoCVSN

Several districts in adjoining Karnataka too have been affected by floods. News agency ANI reported that CM BS Yediyurappa will conduct an aerial survey of these areas and has already assured of all possible assistance. A major reason for the floods here are, reportedly, heavy showers in Maharashtra and the state draining its reservoirs.

The situation is as grim in Gujarat with eight NDRF teams and two IAF choppers carrying out rescue and relief operations on Sunday. Ambika, Purna and Cauveri rivers continue to flow close to the danger mark.