Prime Minister Narendra Modi on Sunday paid tribute to the martyrs in Kyrgyzstan by laying wreath at the Victory Monument in Bishkek. 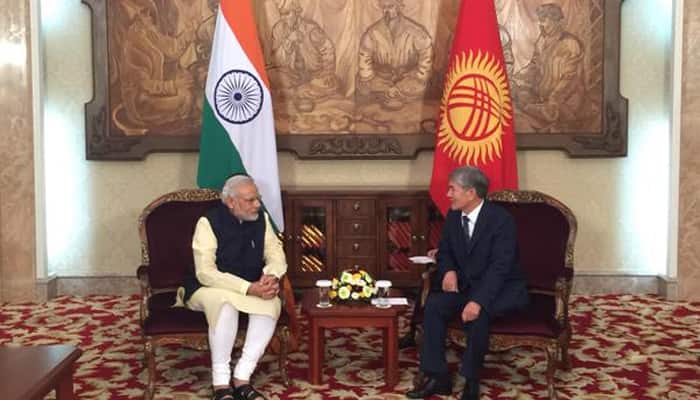 New Delhi: Prime Minister Narendra Modi on Sunday  paid tribute to the martyrs in Kyrgyzstan by laying wreath at the Victory Monument in Bishkek.

Here are the updates:

With PM Sariyev. Our meeting was very positive & we are both optimistic about the ties between our nations. pic.twitter.com/DQcS3lAbng

PM handing over the Certificate of gifts of medical equipment from India to Field Hospital, Kyrgyzstan to Kyrgyz PM pic.twitter.com/GdtAvwyloq

Bollywood connect. Zara Zara Mehakta Hai on the menu at luncheon in honour of PM @narendramodi in Bishkek https://t.co/9Xjs9cPOIm

..And some dazzling Kyrgyz entertainment for the guests at the luncheon pic.twitter.com/gNfXlTXTL5

PM @narendramodi concludes by quoting Kyrgyz poet Alikulov on the need to live in friendship, a philosophy similar to Vasudaiva Kutumbakam

Agriculture is an important sector in our nations. Shall seek to hold roundtable for co-operation in agriculture: PM @narendramodi

The delegation level talks are followed by the signing of agreements and the joint press statement. pic.twitter.com/Kd1r3AQckW

Paying homage to martyrs in the cause of peace. PM @narendramodi lays a wreath at the Victory Monument in Bishkek. pic.twitter.com/KaGKTrIGRa

PM Modi reached Kyrgyzstan last night where he was received by his counterpart Temir Sariyev.

Its never too late for a warm welcome. PM @narendramodi received by PM Sariyev of Kyrgyzstan shortly before midnight pic.twitter.com/ovd2NSGv24

"A traditional banquet. PM @narendramodi speaks at the dinner hosted in his honour by President Berdimuhamedov," tweeted Swarup.

Modi ends his Central Asia tour with a visit to Tajikistan before flying home on July 13.

He has visited Uzbekistan, Kazakhstan and Ufa in Russia for the BRICS and SCO summits.