Bids for the auction for Prime Minister Narendra Modi`s monogrammed pinstriped suit on Friday crossed Rs four crore, with a Surat-based Diamond merchant Lalji Bhai getting the possession of the outfit at a whopping Rs ​4.31 crore. 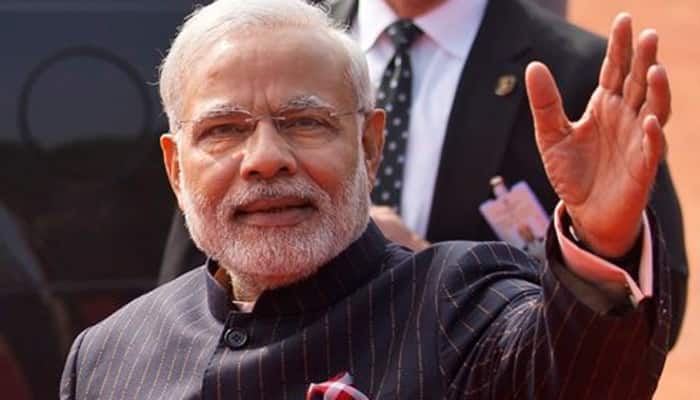 Surat: Bids for the auction for Prime Minister Narendra Modi`s monogrammed pinstriped suit on Friday crossed Rs four crore, with a Surat-based Diamond merchant Lalji Bhai getting the possession of the outfit at a whopping Rs ​4.31 crore.

On Thursday, Surat-based Mukesh Patel enhanced his bid to Rs 1.48 crore from Rs 1.39 crore he had offered earlier. Meanwhile, Bhavnagar-based Ship-breaker Komalkant Sharma, CMD of Leela Group of Companies made a bid of Rs 1.41 crore.

On the first day of auction, textile trader Rajesh Juneja and Global Modi Fan Club's Rajesh Maheshwari had made a bid of Rs 1.21 and Rs 1.25 crore respectively.

There were four other bids of less than Rs 1.21 crore for the suit which Modi had worn during his meeting with the US President Barack Obama.

As the monogrammed bandhgala, which according to some reports is worth Rs 10 lakh, hogged all the limelight at the auction, initially there were few takers for the humble Cricket Australia T-shirt gifted to Modi by bowling great Brett Lee which attracted bids ranging between Rs 1500 and Rs 2000.

However, towards the evening a BJP MLA from Surat and a city-based businessman made two separate bids of Rs 1.11 lakh each for the football world cup jersey and cricket Australia T-shirt gifted to Modi.

Harsh Sanghvi, MLA from Surat's Majura assembly seat, said he will donate the FIFA World Cup T-shirt to a team of blind sportspersons if he won the bid.