In a setback for homosexual rights groups, the Supreme Court on Wednesday set aside the judgement of Delhi High Court decriminalising gay sex among consenting adults in private. 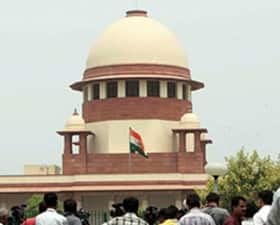 New Delhi: In a big setback to lesbians, gays, bisexuals and transgenders, the Supreme Court on Wednesday set aside the judgement of Delhi High Court decriminalising gay sex among consenting adults in private.

A bench of Justice GS Singhvi and Justice SJ Mukhopadhaya delivered the verdict on a bunch of petitions filed by various social and religious organisations challenging the high court verdict on the ground that gay sex is against the cultural and religious values of the country.

While delivering its verdict, the apex court, however, said it is for legislature to look into desirability of deleting section 377 of Indian Penal Code, but till the time this penal provision is there, the court cannot legalise this kind of sexual relationship.

With the apex court verdict, the operation of penal provision against gay sex has come into force.

With the SC putting the ball in Parliament’s court, Information and Broadcasting Minister Manish Tewari said that Government has already taken a stand that homosexuality needs to be decriminalised, but however, will look into it after studying the judgement.

Law Minister Kapil Sibal said it the Supreme Court`s prerogative to test the constitutionality of the law and their verdict on homosexuality as an offence must be respected by the government.

Congress leader Mani Shankar Aiyar said that appropriate steps must be taken to ensure individuals are treated equally, including those having same sex preferences.

Satisfied with the SC order, Yoga guru Baba Ramdev said that the top court has respected sentiments of millions of Indians and declared homosexuality a crime.

Meanwhile, unhappy with the apex court verdict, NGO Naz foundation said it will seek review of the SC order verdict on homosexuality. "We are disappointed with the judgement. We think the judgement is not correct in law. We will take appropriate legal recourse," senior advocate Anand Grover, who argued the case for the NGO Naz Foundation, said.

We are going to put cops behind gay couples. That's the India we are supposed to create in the 21st century?

Commenting on the SC order, Additional Solicitor General of Indira Jaising said that historical opportunity to expand constitutional values has been lost adding. The first woman ASG of the country was critical of the apex court saying that it is surprising that the court which does judicial review on many issues has put the ball in the court of Parliament to decide on homosexuality.

As the SC pronounced as criminal offence the consensual sex between adults of the same gender, LGBT community said they were dejected, but determined to continue their fight.

Expressing disappointment and shock, gay activist Ashok Row Kavi said: "With this verdict, we are back to square one. But we will fight for our rights. It is essential to note that this has nothing to do with morality and religion."

"We are just asking for inclusive rights in the society. This is just a type of orientation a lot of people are involved in. We are not doing anything on the roads," he added.

Deepti Sharma, voice-raiser LGBT community said the SC order is heart-breaking and will use all legal options available.

"The Supreme Court`s ruling is a disappointing setback to human dignity, and the basic rights to privacy and non-discrimination," Human Rights Watch said.

The apex court`s overruling of a landmark Delhi High Court decision of 2009 "failed to recognize everyone’s internationally protected right to privacy and non-discrimination", it said.

"The Supreme Court has given this verdict to maintain the culture of this country. I don`t know the exact text of the judgement though," said Jilani.

Expressing happiness over the order, Yoga guru Baba Ramdev said that the top court has respected sentiments of millions of Indians and declared homosexuality a crime.

The bench had reserved its order in March last year after granting day-to-day hearing of the case from February 15, 2012.

While hearing the appeal, the apex court had pulled up the Centre for its "casual" approach on decriminalisation of homosexuality and also expressed concern over Parliament not discussing such important issues and blaming the judiciary instead for its "overreach".

While pleading for decriminalisation of gay sex, the Centre had told the court that the anti-gay law in the country had resulted from British colonialism and the Indian society was much more tolerant towards homosexuality.

The high court had on July 2, 2009, decriminalised gay sex as provided in section 377 of the Indian Penal Code (IPC) and ruled that sex between two consenting adults in private would not be an offence.

Senior BJP leader BP Singhal, who died in October last year, had challenged the high court verdict in the Supreme Court, saying such acts are illegal, immoral and against the ethos of Indian culture.

Religious organisations such as the All India Muslim Personal Law Board, Utkal Christian Council and Apostolic Churches Alliance too had challenged the judgment.