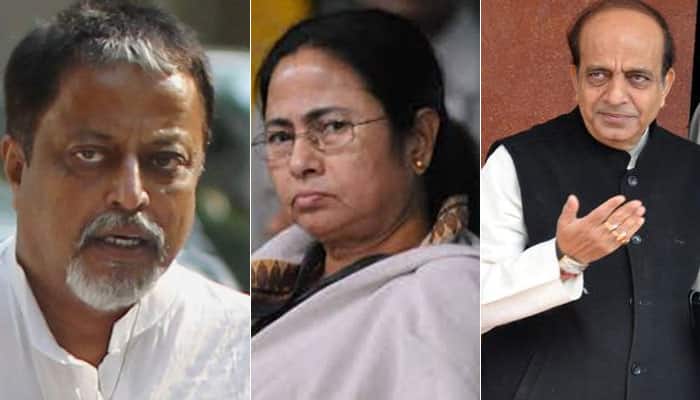 The development comes days after Mukul Roy was grilled by CBI in connection with multi-crore Saradha Chit fund scam. As per media speculation, strained ties between Roy, a Rajya Sabha member, and party supremo over the said scam ultimately reduced his party position and was not even given additional responsibilities that were given to some of his party colleagues.

However, Mukul Roy, who has been made to share responsibility as all-India general secretary with Bakshi, a staunch Mamata loyalist, was conspicuous by his absence from the meeting today.

Asked to explain the absence of Roy, a key party organiser, Chatterjee said "he (Roy) is busy with political activities and has been absent at the meeting by taking prior permission from the party".

Roy had recently said that he was part and parcel of the party, when asked if there was a rift between him and the party leadership.

He also participated in the party's campaign for the by-election to Bongaon Lok Sabha and Krishnaganj Assembly seats in West Bengal which was held yesterday.

He said O'Brien and the party Lok Sabha member Kalyan Banerjee would liason with like-minded parties.

Dinesh Trivedi, who was appointed vice-president of the party, had recently caused a flutter in party circles by singing fulsome praise of Prime Minister Narendra Modi, which set off speculation in the media that he would switch over to BJP, though he maintained that he was still with TMC.

Trivedi, a founding member of Trinamool Congress set up 16 years ago, recently told a TV channel "I won't predict anything, but I want to change the DNA of Indian politics - and for that, I will do whatever it takes."

Notably, he was forced by Mamata to resign in 2012 as Railway Minister in the Manmohan Singh cabinet after his budget contained a passenger fare hike against the wishes of the party supremo.

Chatterjee said that state panchayat minister Subrata Mukherjee had been given the charge of party affairs in Tripura.

"Derek O'Brien will oversee the party's organisation in the Northeast and Kerala. Suvendu Adhikari, another party MP, will oversee Assam," he said. The party's MLAs and MPs and district unit presidents were present at today's nearly two-hour meeting at Banerjee's residence.