Taiwan will not give up its claim over regions in the South China Sea, including over Taiping Island (Itu Aba), under occupation by Chinese troops, the Taiwanese ministry of foreign affairs announced Tuesday. 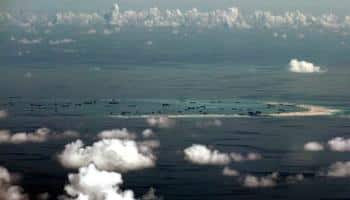 Taipei: Taiwan will not give up its claim over regions in the South China Sea, including over Taiping Island (Itu Aba), under occupation by Chinese troops, the Taiwanese ministry of foreign affairs announced Tuesday.

"The Republic of China (Taiwan) enjoys all rights to these island groups and their surrounding waters in accordance with international law," the ministry of foreign affairs said in a statement.

"The South China Sea islands were first discovered, named, and used, as well as incorporated into national territory by the Chinese," Efe news agency quoted the statement as reading.

Since 1956, Taiwan maintains troops in Taiping Island (Itu Aba), the largest of the Nansha (Spratly) Islands, over which China, the Philippines, Vietnam and other countries have conflicting claims.

Tension in the region has notably increased in the last two months, as images showed construction of artificial islands, many of them with landing strips, in South China Sea, by Beijing.

Taiwan called upon other states, who claim sovereignty over the islands and waters of the South China Sea "to respect the spirit and principles of the United Nations Charter and the United Nations Convention on the Law of the Sea" and "refrain from taking any unilateral action that might escalate tensions".

Taiwan also proposed bypassing the sovereignty dispute and negotiate and share resources to safeguard peace and stability in the region.

Taiwan also demands to be included in any negotiation or agreement affecting Taiping Island or any other island, which it claims, and says it will not acknowledge any agreement that is reached without its participation.