Cyclone Fani battered the coastal districts on May 3 but only half of the over 4.5 lakh electricity consumers in Bhubaneswar have got power supply back at a time when the state is sizzled under intense heat wave. 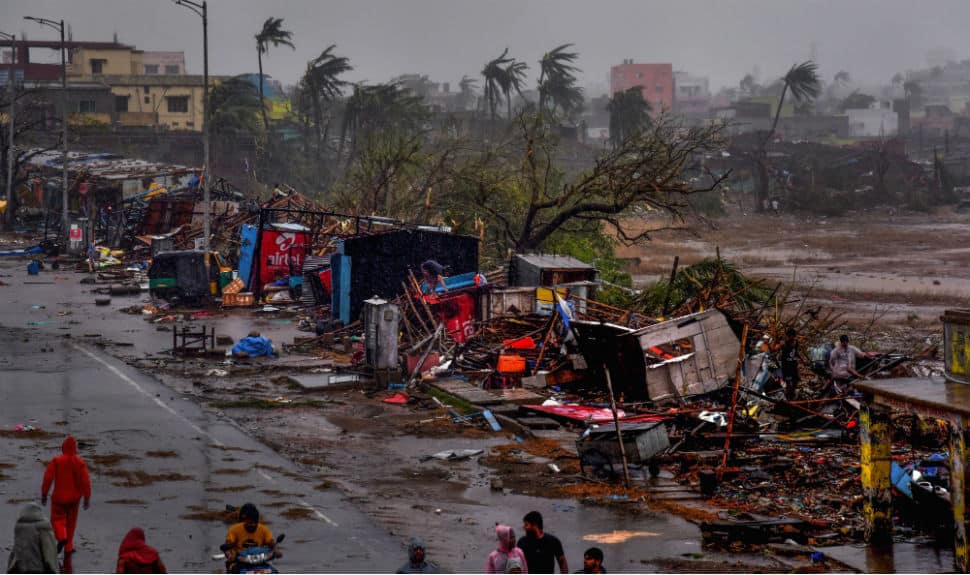 Bhubaneswar: As power and water remained elusive in most cyclone-ravaged areas of coastal Odisha for the eighth day in a row despite the government's efforts to give restoration a push, protests broke out in several places on Friday to press for quick action.

Cyclone Fani battered the coastal districts on May 3 but only half of the over 4.5 lakh electricity consumers in Bhubaneswar have got power supply back at a time when the state is sizzled under intense heat wave.

Police said a large number of people staged a road blockade near Garage Chhak in the state capital demanding quick restoration of power supply which was severely hit due to uprooting of 1.56 lakh electric poles in the city alone.

Protesters also tried to attack an office of the Central Electricity Supply Utility (CESU) here, forcing the employees to lock themselves inside.

"We were scared as angry demonstrators threatened and tried to attack us. We have sought protection from the police," said NK Sahu, a CESU officer.

As similar incidents took place in some other places, police personnel have been deployed at the control room of the CESU and some of its major offices as a precautionary measure, an official said.

Chief Secretary AP Padhi, who held a video conference with Cabinet Secretary PK Sinha, said around 50 per cent of the consumers in Bhubaneswar are now getting electricity.

"We have prepared a roadmap for electrification. With additional manpower from other states available, restoration work is picking up," he said adding there has been a substantial improvement in telecom sector too.

Information and Public Relations Secretary Sanjay Singh said 100 per cent restoration of power supply in Bhubaneswar is expected to be achieved by Sunday.

Energy Secretary Hemant Sharma, however, said around 90 per cent of the power consumers in the state capital will be able to get electricity by that day.

While all power consumers in Cuttack will be able to get electricity on Saturday, restoration work in the worst-hit Puri town will begin on May 12.

Restoration work in telecom sector has witnessed slow progress, Singh said adding that only 14 per cent of mobile towers and other infrastructure remained unaffected by Fani.

While landline phones have started functioning in Puri, Cell on Wheel (COW) have been deployed in some places in the pilgrim town to improve cellular connectivity, he said.

COWs provide fully-functional but temporary service, via vehicles such as vans and trucks, to zones affected by natural disaster or areas with large user volume, such as major events.

In a bid to accelerate relief and restoration works, Chief Minister Naveen Patnaik directed that government offices in five severely affected districts - Puri, Khurda, Cuttack, Jagatsinghpur and Kendrapara - will be kept open on this Saturday and Sunday.

Exactly a week ago on May 3, the cyclone Fani made landfall near Puri, affecting more than 1.5 crore people in 14 districts destroying all the basic infrastructure like power, drinking water and telecommunication.

At least 41 people were killed in the calamity that damaged 5.08 lakh houses. Over 34.56 lakh livestock casualty has also been reported from the 14 affected districts, a report of the special relief commissioner's office said.

In a bid to give succour to the cyclone-affected people, the State Level Banker's Committee (SLBC) resolved to reschedule repayment of existing loans.

Fresh loans may also be extended as per requirement of the cyclone victims, said an official adding that banks will also provide assistance to hotel industry in Puri.

Similarly, insurance companies may relax the document requirement and simplify procedures for the settlement of claims, he said.

The SLBC said that banking service is functioning in all affected areas except Puri and the chief secretary urged the banks to open branches there on Monday.

While seven mobile ATMs have been deployed in Puri, 10 more are being made available by the SBI in the pilgrim town, he said.

The chief minister urged Union Petroleum Minister Dharmendra Pradhan to allot an additional quota of 1000 kilolitres of kerosene over and above the normal quota in order to provide relief to the affected people.

Pradhan, who took stock of the situation here, said of the 234 filling stations in Puri district, 232 have become operational and two others to start working from Saturday. There is enough stock of kerosene, petrol and diesel in the cyclone hit areas, he said.

Pradhan said steps have been taken to provide two mobile tankers to distribute petrol and diesel to consumers in Puri town. "We have been able to bring 100 per cent normalcy within a week," he said.

With huge damage caused by the mid-summer cyclone that ripped through the state's coastal region, the Centre is rushing an inter-ministerial team to assess the situation.

The central team led by additional secretary in the Ministry of Home Affairs, Vivek Bharadwaj, will arrive here on May 12 for a three-day visit, said SRC BP Sethi.

Prime Minister Narendra Modi on May 6 made an aerial survey of the cyclone hit areas of Puri and Khurda district and the Centre thereafter released Rs 1,000 crore as interim assistance to carry out relief and rescue operation.

An East Coast Railways (ECoR) official said Memu trains between Puri-Talcher and Puri-Angul resumed on Friday. He said only four trains from Puri were now cancelled while all other trains are running as per the schedule.

DishTV and D2H extend their support to Cyclone-hit Odisha, set up free service camps for customers