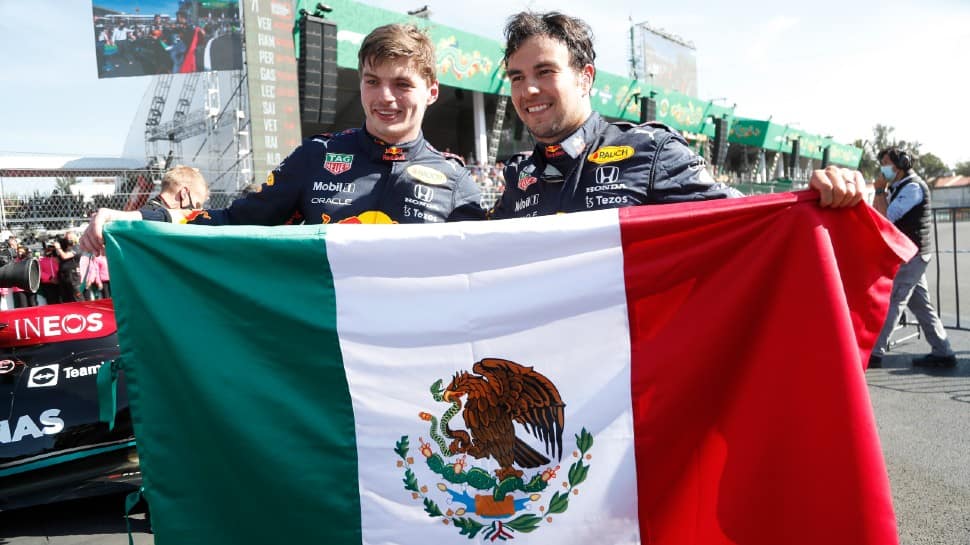 Red Bull's Max Verstappen celebrated a dominant win in the Mexico City Grand Prix on Sunday to surge 19 points clear of Lewis Hamilton in the Formula One championship with four races remaining. Seven-times world champion Lewis Hamilton was second for Mercedes, holding off Red Bull's Sergio Perez who became the first Mexican to stand on his home podium at a jubilant Autodromo Hermanos Rodriguez.

Red Bull closed the gap to Mercedes in the constructors' standings to one point. "It's still a long way to go but it's, of course, looking good, but also it can turn around very quickly," said Verstappen, 24, of his big step forward in the championship battle.

Keep your head up Lewis!

Still plenty to be proud of with a strong finish on the podium #MexicoGP #F1 pic.twitter.com/fQZ8HDLHA7

The championship leader seized the lead into the first corner from third on the grid, after going three abreast with the two Mercedes, and gave Hamilton no chance to hit back once an initial safety car period was out of the way.

"I gave it absolutely everything and it was a great fight with Sergio at the end, I was able to at least get second," said Hamilton.

Perez was hoisted high on the shoulders of his mechanics as he waved the Mexican flag to salute the crowd before the podium ceremony. "Of course I wanted more, I wanted to get a one-two for the team but I didn't have a single chance to get through," he said after his third podium in a row after third places in Texas and Turkey.

Verstappen took the chequered flag 16.555 seconds clear of Hamilton to seal his ninth victory of the season, third in Mexico and 19th of his career. The safety car was deployed until lap four after a collision at the start between Haas' Mick Schumacher and AlphaTauri's Yuki Tsunoda, while McLaren's Daniel Ricciardo tagged the back of Valtteri Bottas's Mercedes and lost his front wing.

A nightmare start for Bottas, a thriller for Verstappen #MexicoGP #F pic.twitter.com/YimWSYxe9i

Bottas, who had taken a surprise pole position on Saturday, was spun around and dropped to 18th place after an immediate pitstop. The Finn ended up 15th but pitted for fresh tyres to snatch the fastest lap from Verstappen at the end, denying the Dutchman a precious bonus point without it coming to Mercedes since he was outside the top 10.