The India-Australia encounter, featuring the two highest ranked teams in the six-nation competition, is billed as the marquee match of the preliminary league. 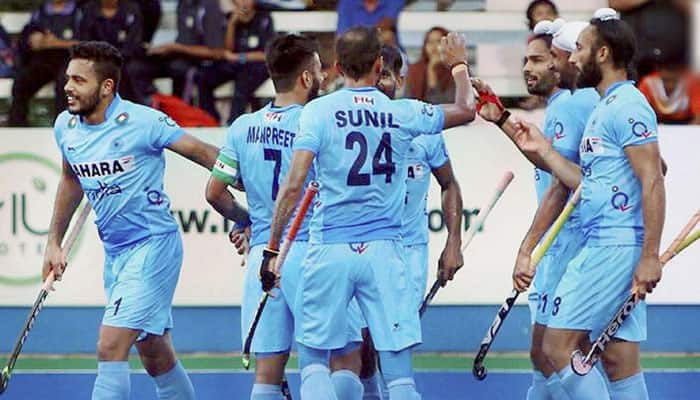 Ipoh: Buoyed by an impressive start, a confident India will be aiming to take their performance a notch higher against defending champions Australia in the third round-robin league encounter of the Sultan Azlan Shah Hockey tournament, here tomorrow.

After being held to a 2-2 draw by Great Britain on the opening outing, the Indian strikers produced a better performance in the 3-0 victory over New Zealand, who had earlier held World champions Australia to a 1-1 draw in their first fixture.

Using the tournament to fine-tune their squad after the induction of several youngsters, Australia gave an exhibition of their powerful game by outplaying hosts Malaysia 6-1 yesterday.

The India-Australia encounter, featuring the two highest ranked teams in the six-nation competition, is billed as the marquee match of the preliminary league.

"We want to continue improving. That's the objective we had before coming to Ipoh, but we surely want good results," says Indian team coach Roelant Oltmans.

He expressed satisfaction with the effort of his strikers in the second outing after a critical comment on their inability to create goal-bearing chances in the opening match.

"One of the most important things for me is finding the cohesion between the forwards and the midfield. We have now managed to do that," said Oltmans.

"Our forwards played a different game against New Zealand compared to the first outing, but then it also has to do something with who's the opponent," he said.

"We must look at improving further in the next outing."

Oltmans said he wanted the defenders to review their performance of the first quarter against New Zealand, when the Indian defence seemed erratic and allowed leeway to rival strikers in the Indian territory.

"To be honest, I wasn't happy with the first quarter performance. I do not know why we made so many mistakes in that period," said Oltmans.

The coach, however, was pleased that India did not allow a single shot at their goal after the first quarter.

"When we cut out the mistakes of the first quarter, we were completely in control of the match," he said.

The feature of the Indian victory were the seven penalty corners India earned in the last match and the two goals Harmanpreet Singh scored with aplomb, which even drew praise from Australian coach Colin Batch.

"The penalty corners seem a real strength of the Indian game. It can be a real threat," said Batch, a long-serving star player of the Australian teams in his playing days.

"Australia versus India will be a competitive game and the highlight of the day?s fixtures," said Batch, pleased that his combination had got into rhythm against Malaysia.

"In international hockey, if you are not happy with your performance in one match, you have to change within 24 hours," said Batch, delighted that his strikers had got into goal- scoring action.

World No 6, India are expected to earn a title showdown with Australia, who are nine-time winners of the Sultan Azlan Shah Cup and ranked second in the world even after their disappointing show in the 2016 Olympics.

Last year's runners-up, India have won this title five times, including the being joint champions with South Korea in a rained-off final in 2010. That was the last of India?s title triumphs in Ipoh.

"It is premature to start taking about the final. There are three teams on four points and we are striving to earn a place in the title contest," said Batch.

Great Britain are the third team on four points from two outings, but Australia lead the standings on basis of their superior goal different, following by India and Britain in that order.