I must retire, the head is thinking something else and fingers another: Amitabh Bachchan

In his recent blog, Amitabh Bachchan penned down his inner thoughts which can make his fans sad.

New Delhi: Megastar Amitabh Bachchan has been entertaining the audiences for more than four decades now. The legendary star not only has an illustrious body of work to his credit but also keeps in sync with the latest social media trends.

He is active on Twitter and even writes a blog regularly. In his recent blog, he penned down his inner thoughts which can sadden his huge fan following. Well, he has talked about retiring and how he is stuck between head and heart. 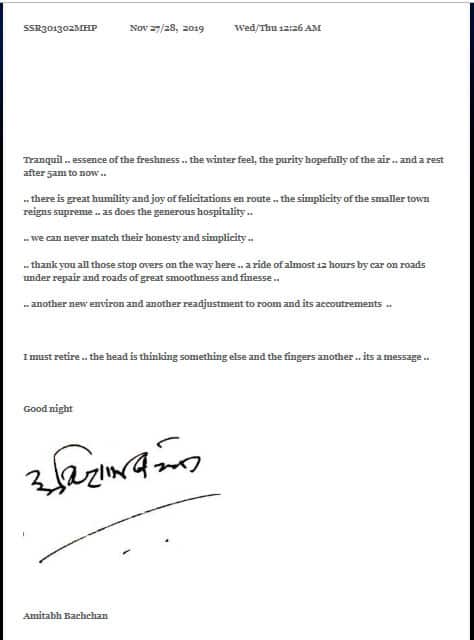 The thespian ends his blog with a line which reads: I must retire .. the head is thinking something else and the fingers another .. its a message"

Amitabh Bachchan hosts popular reality quiz show 'Kaun Banega Crorepati' on television. On November 29, 2019, the grand finale episode of the show for season 11 will be telecast. He has been associated with KBC for a decade. The only season which he didn't host was season 3 which was anchored by Shah Rukh Khan.

Recently, he completed 50 long years in Indian cinema and social media was flooded with congratulatory messages pouring in from all walks of life wishing him 'all the best' for the coming golden years.