Miguel Herrera, Mexico`s national soccer team coach, was fired on Tuesday, a day after he allegedly punched a reporter who had criticized his team`s performance in the recent Copa America and Gold Cup tournaments. 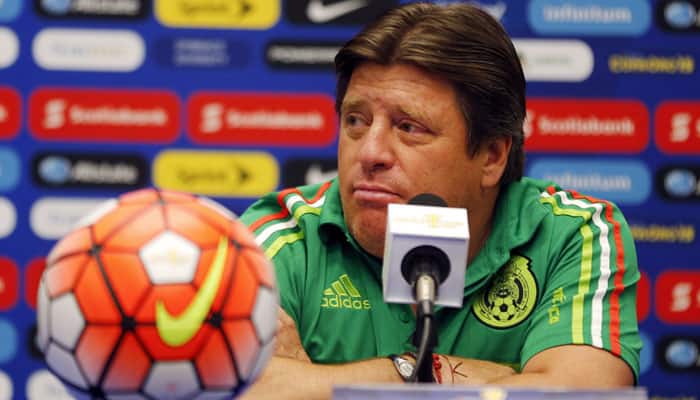 Mexico City: Miguel Herrera, Mexico`s national soccer team coach, was fired on Tuesday, a day after he allegedly punched a reporter who had criticized his team`s performance in the recent Copa America and Gold Cup tournaments.

"After evaluating the situation and listening to everyone that makes up this family, I`ve made the decision to remove Miguel Herrera from his post," Decio de Maria, president of the Mexican Football Federation (FMF), told a news conference as he announced Herrera`s termination.

"As far as what Miguel and I discussed, the only thing I can say is that it was very tough for Miguel," he said.

Christian Martinoli, a sports reporter for Mexico`s TV Azteca, said on Monday that Herrera threatened him then hit him in the neck at Philadelphia`s airport as the Mexican team were heading home after a 3-1 victory against Jamaica to win the CONCACAF Gold Cup tournament.

De Maria said Herrera had apologised about the airport incident, but speaking on local radio, he added: "You can`t respond to aggression with aggression."

A new coach would be named before September, de Maria said.

TV Azteca`s Martinoli had strongly criticized Herrera during the team`s group stage exit from the 2015 Copa America in Chile.

TV Azteca`s parent company, Grupo Salinas, had called on the FMF to launch an immediate investigation into the incident.

The row followed a separate controversy last month. During elections shortly before the Copa America, Herrera had tweeted his support for Mexico`s Green Party, prompting the FMF to say it would fine him for a breach of ethics.

Herrera came into the job near the end of 2013 after Mexico had sacked three previous coaches as the team nearly failed to qualify for the 2014 World Cup in Brazil. Scraping through the CONCACAF qualifiers in fourth place, Mexico needed a playoff victory over Oceania group winners New Zealand to secure their berth.

During his tenure as coach, Herrera led the Mexican squad to 19 victories, 11 ties and 7 losses.

Nicknamed "El Piojo," or "The Louse" in Spanish, Herrera`s animated, energetic persona made him a star in Mexico, but his team performed poorly in Chile as an invitee to the Copa America, the South American championship, failing to win a single game.

That was a blow for Mexico, which had inherited a squad with a number of promising young players from the under-23 side that in 2012 won Olympic gold in London.

Mexico will now be looking for a new head coach ahead of an Oct. 9 playoff against the United States for CONCACAF`s berth at the Confederations Cup in 2017 followed by the qualifying campaign for the 2018 World Cup, both of which will be hosted by Russia.