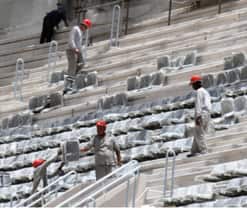 Belmopan (Belize): Football’s governing body FIFA has launched a probe into the state of the sport in Belize after the country’s leading football team was expelled from the 2014-15 CONCACAF Champions League.

The operations of the Football Federation of Belize (FFB) are currently under scrutiny after Belize Premier League champions Belmopan Bandits were removed from the league Friday, reports CMC.

The decision to eject Bandits was taken after confederation inspectors ruled that the pitch at the FFB stadium was unplayable.

FFB President Ruperto Vicente said FIFA has already contracted a local company to assist the federation to put its finances in order.

“What is going to happen here in October, in fact right now, FIFA is in the process of evaluating everything that we are doing,” Vicente told a news conference here.

“The way we deal with our finance; in fact, FIFA has contracted a local company to assist this federation in dealing with its finances."

CONCACAF inspectors who examined the playing surface at the FFB stadium found that the conditions did not meet the regulations for Champions League standards.

Belmopan Bandits were scheduled to play their first game in the competition, at home, Friday against El Salvador`s Isidro Metapan.

The FFB Stadium had received $1.8 million from FIFA for an upgrade which included improved lighting, seating for 5,000 fans, separate shower stalls and changing rooms for participating teams and referees.

The failure to bring the pitch itself up to standard is seen here as a huge disappointment in a country which has no alternative venue that could be used.

FFB President Vicente and his executive members have been criticised in some circles here over the state of the pitch and the expulsion from the Champions League of the Bandits, three times winners of the Belize Premier League.

Belmopan Bandits will be replaced in the competition by Costa Rica`s Club Sport Herediano.

Meanwhile, the country’s football chief has announced that FIFA is to take control of the sport in Belize for two years as part of a major restructuring.

Take-over plans involve a stakeholder workshop, the hiring of a manager to run the league and the funding of a secretariat.