Ahead of Kumbh Mela 2019, Uttar Pradesh Chief Minister Yogi Adityanath and Deputy CM Keshav Prasad Maurya surveyed Prayagraj on Thursday. The 55-day long Kumbh Mela is scheduled to begin on January 15 and will end on March 4. 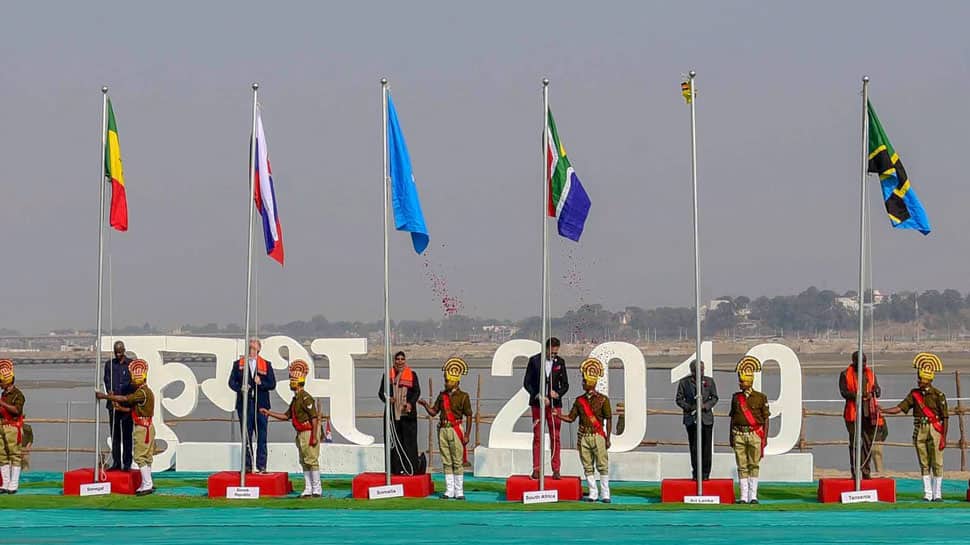 "The appropriate theme is Swachh Kumbh, Surakshit Kumbh, so that 'Kumbh' can send a message to the world. One lakh 22 thousand eco-friendly toilets have been installed, more than 40,000 street lights have also been put up," said Adityanath.

For 2019 Kumbh, Adityanath-led UP government earmarked an amount of Rs 2,800 crore. The Mela will be organised over an area of 3,200 hectares. Over 1.22 lakh toilets have been constructed, 20 thousand dustbins set up, and 42 drains emptying into the Ganga have been taped.

The state police is also keeping a strong vigil and monitor the areas adjoining the banks of river Ganges and its tributaries.

"As per the order by the Director General of Police (DGP) to all the senior police officials in all the districts, it has been instructed to ensure that any sort of illegal industrial activity or waste should not be discharged into Ganges and its tributaries including Yamuna," said Praveen Kumar, Inspector General (Law & Order), Uttar-Pradesh Police.

Elaborate security arrangements have been made for the Kumbh Mela at Prayagraj, with intelligence agencies, central police forces, and contingents of civil police been deployed tactfully to work in a coordinated manner, informed the official.

In a first, Kumbh Mela- the largest religious gathering on earth- will witness the use of artificial intelligence for better crowd management this year.

The grand festival has a history dating back to at least 1,500 years. It will host over 5,000 camps from multiple akhadas and ashrams. Representatives from 192 countries will visit the festival in February, officials said, adding that ambassadors of 71 countries had already witnessed the preparations for the event.

No doctor at UP health centre, woman delivers baby on floor