With Keshav Prasad Maurya out of CM race, spotlight shifts to Manoj Sinha, Rajnath Singh; Yogi Adityanath not ruled out too

With state BJP chief Keshav Prasad Maurya ruling himself out as the frontrunner for the post of Uttar Pradesh Chief Minister, the spotlight has now shifted on Union Telecom Minister Manoj Sinha, Lucknow mayor Dinesh Sharma. 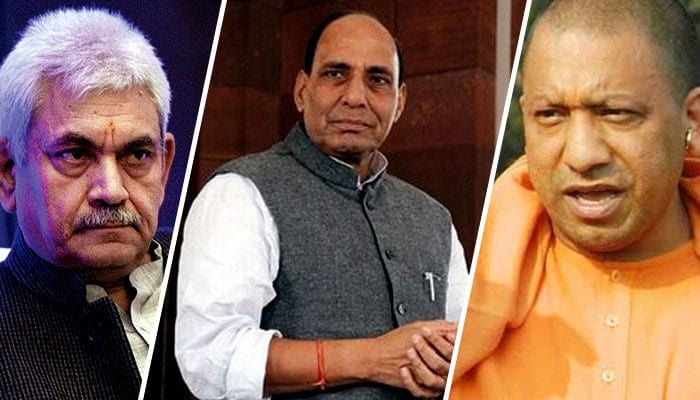 New Delhi: With state BJP chief Keshav Prasad Maurya ruling himself out as the frontrunner for the post of Uttar Pradesh Chief Minister, the spotlight has now shifted to Union Telecom Minister Manoj Sinha, Lucknow mayor Dinesh Sharma as other top contenders for the top job.

While the name still being discussed mostly is that of Union Home Minister Rajnath Singh, BJP's firebrand leader and Gorakhpur MP Yogi Adityanath's name is also in the reckoning.

BJP, at the moment, is still undecided over its top choice for the chief minister's post, five days after its resounding triumph in the most populous state, where the party won 325 seats out of 403 with its allies.

Union Home Minister Rajnath Singh, a former UP Chief Minister, is said to be among the frontrunners for the coveted job because of his stature and administrative experience. However, he had himself dismissed the possibility.

"Kya faltu baat kar rahe hain (what nonsense)," he had earlier said when asked whether he was a contender.

Interestingly, Maurya, who was till today considered one of the frontrunners for the post of Chief Minister, ruled himself out, saying he had been entrusted with the job of “selecting the next Chief Minister”.

When asked who would be the next UP CM, BJP chief Amit Shah today said, “Keshav jiska naam tay karenge, uspe mohar laga denge. (We will give our stamp of approval to Keshav’s pick)”.

Speaking to reporters later, Maurya himself ruled out his chances of becoming CM. “Mere paas toh naam tay karne ka zimma hai. Apna naam koi kaise tay karega? (My responsibility is to zero in on the next name. How can anyone pick their own name?)”

Maurya has great similarities with Prime Minister Narendra Modi in more ways than one, and has been a dedicated RSS worker who rose through ranks, sold tea at his father’s tea stall as a child and hails from an OBC background.

At just 47, Maurya has emerged as one of the tallest leaders in the UP BJP in a short amount of time. He contested the UP Assembly polls three times — 2002, 2007 and 2012 — before being elected to the Lok Sabha in 2014 from the Phulpur constituency, a seat once represented by Jawaharlal Nehru.

In April last year, he was appointed as UP BJP president. Maurya’s OBC status made him a strong contender for the top job in UP.

With Maurya not in the race now, the spotlight has now shifted to other contenders with Manoj Sinha, Kalraj Mishra, Uma Bharti, Yogi Adityanath and Lucknow mayor Dinesh Sharma being the top ones.

Among them, Manoj Sinha, is an upper caste Bhumihar from the Poorvanchal belt where Prime Minister Narendra Modi's constituency Varanasi is also located.

Sinha, MP from Ghazipur, is serving his third term in the Lok Sabha and was given independent charge of Communication Ministry by PM Modi last year after he impressed him with his performance as Minister of State for Railways.

While Rajnath Singh and Sinha are upper caste Thakur and Bhumihar respectively, Maurya has emerged as the OBC face of the party. His elevation as state BJP chief, many feel, helped rally non-Yadav backward castes around the party.

And last but not the least is the fiery Gorakhpur MP Yogi Adityanath. The head of the Gorakhnath Temple is also being seen a the CM face. A section of the local RSS leadership backed the move. ​However, in view of PM Narendra Modi's habit of throwing surprises, it is also likely that his choice for the coveted post could be someone who may not have been discussed in media with strong links with RSS.