A Canadian couple has been facing intense criticism from social media users for posting a photo showing them kissing behind the carcass of a lion during a hunting trip in South Africa. 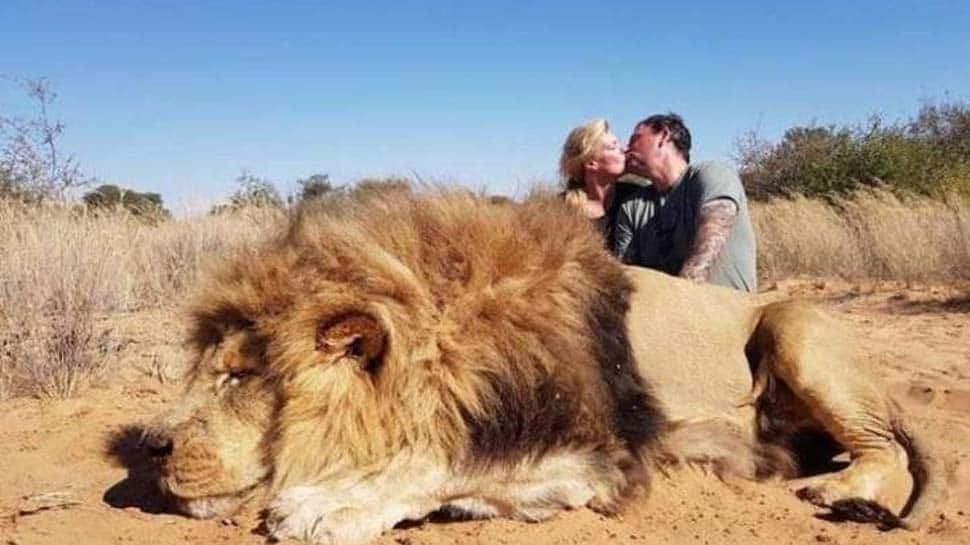 A Canadian couple has been facing intense criticism from social media users for posting a photo showing them kissing behind the carcass of a lion during a hunting trip in South Africa.

In the photo, which has now gone viral, the couple can be seen posing for a “romantic” photo with the carcass of a male lion when they were on a hunting safari in June.

The viral photo was first posted on a Facebook page belonging to Legelela Safaris, which is a trophy-hunting company that offers a wide range of animals as prey to its customers. In the photo, the couple has been identified as Carolyn and Darren Carter of Edmonton.

It’s unclear whether the lion was shot dead by the couple or someone else killed the animal, but big-game hunting is not illegal under South African law. “Hard work in the hot Kalahari sun … well done,” the original post read, according to reports. “A monster lion.”

In another photo, the Carters can be seen posing with the carcass of a male white lion. The photo has sparked an intense online backlash against the Carters with several netizens writing angry comments on the Facebook page of the couple.

“Your despicable hunting photos have made headline news,” user Justa Kruger wrote on their page. “You aren’t heroes but villains. What a disgrace you are.”

Some suggested that the couple would face the result of their misdeed in the future.

The intense criticism forced Legelela Safaris to delete the controversial Facebook page. It is learnt that the Carters own and operate Solitude Taxidermy in Parkland County, Alta.