Scientists capture the biggest python ever found in US

The python captured in the US state of Florida weighed 140 pounds and contained 73 developing eggs. 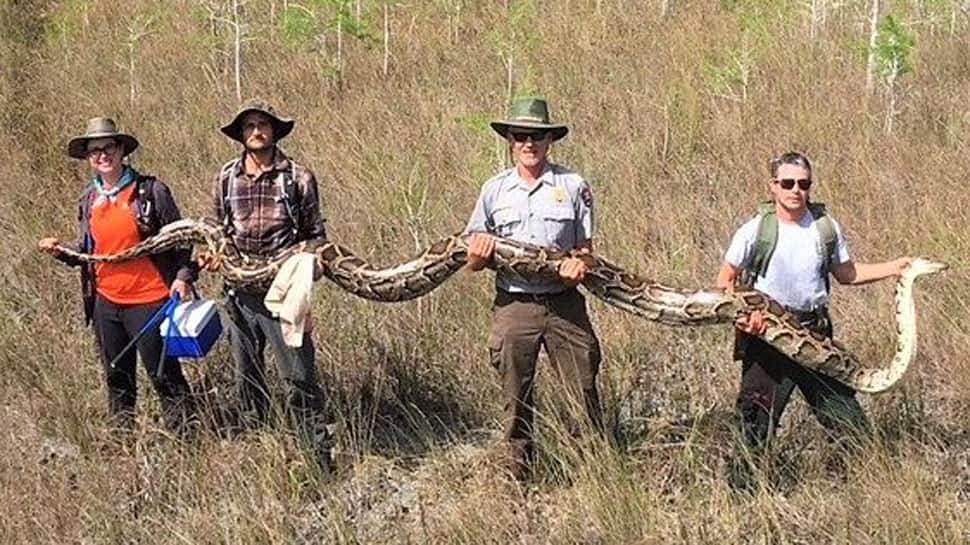 MIAMI: In a first, scientists have captured a female python that was more than 17-feet-long. The python captured in the US state of Florida weighed 140 pounds and contained 73 developing eggs.

Scientists said that the python is the largest ever removed from Big Cypress National Preserve, located in South Florida. The scientists used new tracking technology to catch the Big Cypress snake, the national preserve said in a social media post. USA Today reported that Radio transmitters are used by scientists at the national preserve to track male pythons and then the locations of the males used to find breeding females.

"The team not only removes the invasive snakes, but collects data for research, develop new removal tools, and learn how the pythons are using the Preserve. The team tracked one of the sentinel males with the transmitter and found this massive female nearby," a social media post about the removal says.

The Big Cypress National Preserve is a 729,000-acre expanse of swampland west of Miami in South Florida. CNN reported that around 100,000 pythons are living in the vast swamps outside Miami and these snakes are considered as serious threats to native wildlife.

Florida holds competitions in order to encourage hunters to remove these snakes and keep a check on their population.

The inaugural Python Challenge was organised in 2013 by the Florida Fish and Wildlife Conservation Commission and some 1,600 people had registered for this. The searchers, however, managed to find only 68 snakes.

In 2017, a $175,000 pilot program was launched by the South Florida Water Management District under in which 25 hunters were paid to euthanize pythons.