An FIR was registered against the actor in Maniktala for his speech. He had made a controversial statement “maarbo ekhane lash porbe soshane” & “ek chobole chobi” during an election rally at Brigade Parade Grounds on March 7 in presence of PM Narendra Modi. 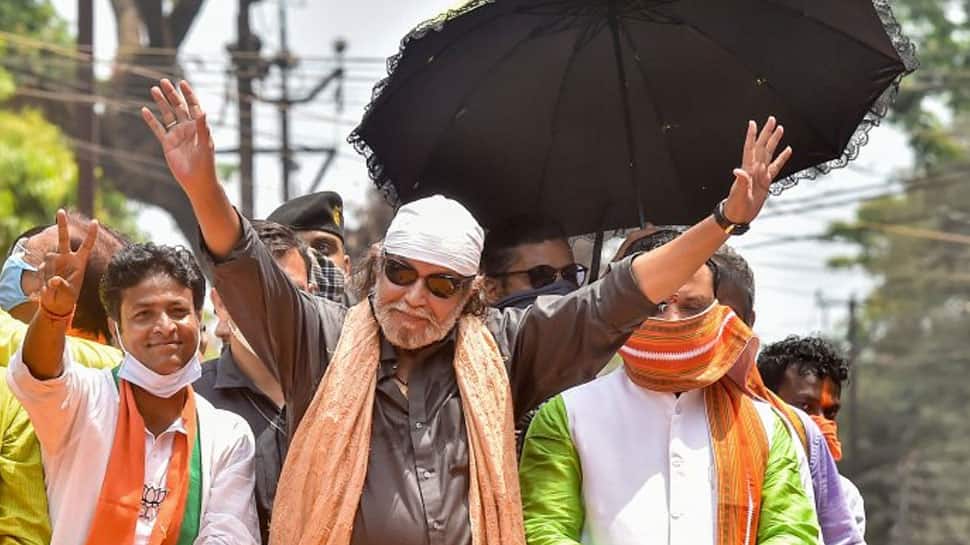 KOLKATA: Veteran Bollywood actor and Bengal BJP leader Mithun Chakraborty was on Wednesday grilled by the Kolkata Police in connection with a controversial speech made by him while campaigning for the recently concluded West Bengal assembly polls.

The actor had reportedly made a controversial statement “maarbo ekhane lash porbe soshane” and “ek chobole chobi” during an election rally at the Brigade Parade Grounds on March 7 in presence of PM Narendra Modi.

An FIR was also registered against the actor in Maniktala for his speech. The complainant claimed in his FIR that the actor had used dialogues like "marbo ekhane lash porbe shoshane (I will hit you here and the body will fall in the crematorium)" and "ek chobole chabi (just one snakebite and you will become a photograph) during a BJP campaign rally at the Brigade Parade Ground in Kolkata for the West Bengal assembly elections.

It was also alleged that the actor's utterances were a cause for post-poll violence in the state. The 71-year-old actor, who was among the BJP's star campaigners in the April-May election, was questioned virtually in connection with the case filed against him.

Mithun Chakraborty had, last week, filed a petition before the Calcutta High Court seeking quashing of the case registered against him for alleged incitement to post-poll violence through his speeches, in which he had uttered popular dialogues from his films.

He had sought the quashing of FIR against him under Sections 504,505,153A,120B of the IPC. However, the court asked him to join the investigation virtually.

According to reports, the veteran Bollywood actor was questioned for about 45 minutes by the officers of Kolkata Police.

In the aftermath of the post-poll violence in Bengal, Chakraborty had urged people to stop violence which has wrecked the state since the Assembly election results on May 2.

The Bharatiya Janata Party (BJP) leader said that “human lives are more important than politics” and asked people to “stop this violence”.