The United Kingdom is heading towards a constitutional crisis at home and a showdown with the EU as Prime Minister Boris Johnson has pledged to leave the bloc in 66 days without a deal unless it agrees to renegotiate the Brexit divorce. 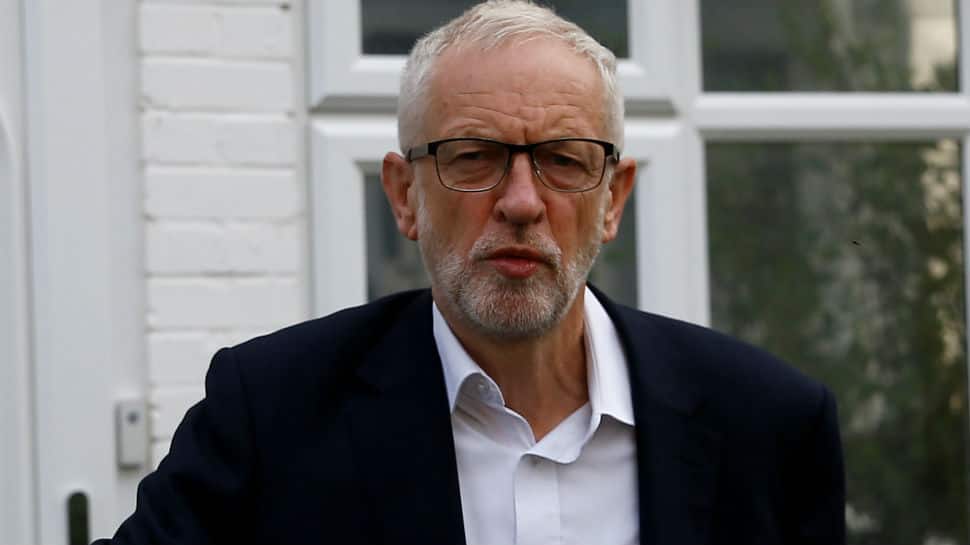 LONDON/BRUSSELS: Opposition Labour Party leader Jeremy Corbyn said he would do everything necessary to prevent Britain leaving the European Union without a divorce deal as he met senior lawmakers from other parties on Tuesday to discuss tactics.

The United Kingdom is heading towards a constitutional crisis at home and a showdown with the EU as Prime Minister Boris Johnson has pledged to leave the bloc in 66 days without a deal unless it agrees to renegotiate the Brexit divorce.

Corbyn said an EU exit without an agreement would leave Britain at the mercy of President Donald Trump and US corporations.

"The battle to stop no-deal Brexit isn`t a struggle between those who want to leave the EU and those who want continued membership," Corbyn wrote in the Independent newspaper.

"It`s a battle of the many against the few who are hijacking the referendum result to shift even more power and wealth towards those at the top. That`s why the Labour Party will do everything necessary to stop a no-deal bankers` Brexit."

Britain is on course for a no-deal exit on Oct. 31 unless parliament can stop it or a new agreement is reached with the EU.

The British parliament has rejected three times the withdrawal deal agreed between Johnson`s predecessor Theresa May and the EU, deepening a three-year crisis that threatens Britain`s status as one of the world`s pre-eminent financial centres and a stable destination for foreign investors.

Johnson held talks last week with German Chancellor Angela Merkel, French President Emmanuel Macron and European Council President Donald Tusk about his demand that the Brexit deal on offer is changed to remove the so-called backstop, an insurance policy to prevent the return of a hard border in Ireland.

He is due to talk by phone with European Commission President Jean-Claude Juncker later on Tuesday and earlier spoke to Dutch Prime Minister Mark Rutte. A UK official said Johnson`s Brexit adviser David Frost would travel to Brussels on Wednesday for informal discussions.

EU officials say they are listening to Johnson`s arguments to replace one of the most hotly contested elements of the divorce agreement, something the bloc has previously said it will not agree to. A British official said it was felt there had been softening in the EU`s rhetoric around the backstop.

"It`s good that there is a vibrant discussion, ideas are put forward but it’s up to the UK government to come up with concrete proposals that would be compatible with the Withdrawal Agreement," European Commission spokeswoman Mina Andreeva said.

One EU diplomat said Johnson had not made any big mistakes at the G7 summit in France at the weekend, his first outing on the international stage since taking office last month.

"If we could get something similar and if this thing would not be called a backstop - we could have success. All this may mean that, in the end, Johnson will have proven himself to be a refined strategist rather than suicidal," the diplomat said.

British lawmakers return from their summer break on Sept. 3, reconvening for a fight that will determine the fortunes of the world’s fifth-largest economy.

Votes in parliament have shown there is majority support for measures to block or hinder a no-deal exit.

But any majority would be unstable, made up of lawmakers from different parties that are ideologically opposed, except when it comes to stopping a disorderly Brexit.

Keir Starmer, the Labour Party`s Brexit spokesman, said the purpose of Tuesday`s meeting with other opposition parties was to agree a plan for when parliament returns.

The anti-Brexit Liberal Democrat party, the Scottish National Party, the Welsh nationalist Plaid Cymru and a group of independent lawmakers are due to attend the discussion.

But there are continuing splits about tactics.

Liberal Democrat leader Jo Swinson has said Corbyn should drop the idea of trying to become a caretaker prime minister if parliament forces the government`s collapse.

"I think we are less likely to win that vote of no confidence if there is the prospect of Jeremy Corbyn becoming prime minister," she told Sky News.

Parliament usually sits for only two weeks at the start of September before breaking while the parties hold their annual conferences.

"People can see that, and it adds to the cynical view that millions of voters have towards politics and politicians."