Iraqi security forces break up protests in Battle of the Bridges

The shootings took place on or near three of Baghdad`s main bridges - Ahrar, Shuhada, and Bab al-Muadham - which have become focal points of the protests. 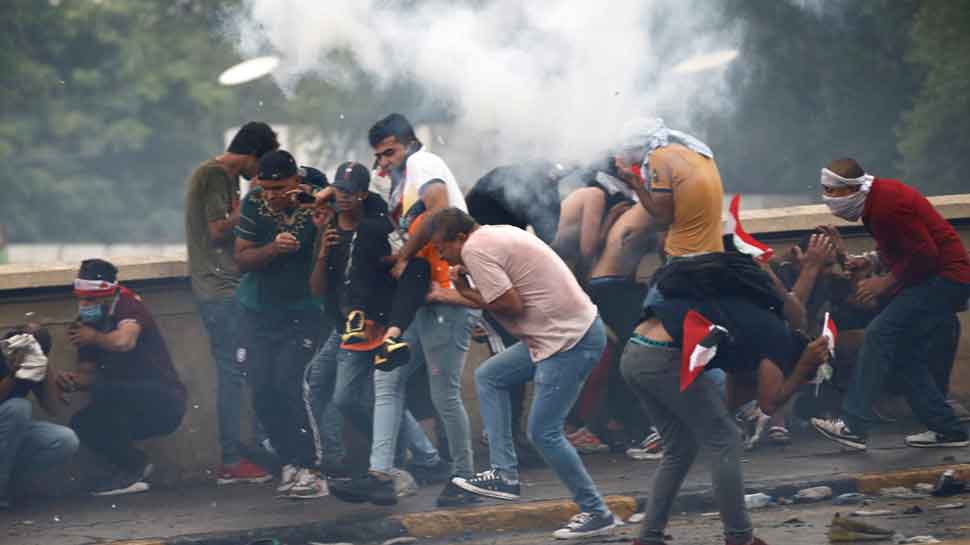 BAGHDAD: Iraqi security forces fired tear gas and live rounds into the air to disperse protesters in central Baghdad on Wednesday as the biggest wave of anti-government demonstrations in decades spread out across the capital.

The shootings took place on or near three of Baghdad`s main bridges - Ahrar, Shuhada, and Bab al-Muadham - which have become focal points of the protests. Chaotic scenes unfolded as the din of gunshots and stun grenades rocked the streets where groups of anxious young men - some heavily bandaged - ran from security forces, Reuters correspondents said. Tuk-tuks whizzed by ferrying protesters, some of them wounded.

Armoured police vehicles blocked their path, turning most away. Policemen dragged a driver out of his tuk-tuk and beat him and a fellow rider with sticks before arresting them.

At least 18 people were arrested, security sources said later. There appeared to be no deaths. At least 27 people sustained tear gas-related injuries, medical sources said. More than 260 Iraqis have been killed since the start of October in the largest demonstrations since the fall of Saddam Hussein in 2003. Protesters are demanding the overthrow of a political class seen as corrupt and beholden to foreign interests.

Protesters had begun trying to block bridges earlier this week as part of efforts to bring the country to a standstill, with thousands joining anti-government demonstrations in the capital and southern provinces. Security forces killed at least five people on Monday during one such attempt.

On Wednesday, the usually bustling surrounding streets were empty, with most shops shuttered. "We are peacefully protesting," said Abu Zahra, 50. "We are here to block the bridges. If we don`t, security forces are going to retake all the bridges and Tahrir Square, and end our protest. We are defending our brothers in Tahrir."

Thousands of people had been gathering for weeks in central Tahrir Square. Clashes over two other bridges near the square have taken place regularly, bringing the total of blocked bridges to five.

"Blocking roads and bridges is illegal sabotage. Security forces have strict orders not to use live ammunition against protests and they are adhering to the rules of engagement but this could change," the prime minister`s spokesman said.

Since defeating Islamic State in 2017, Iraq has enjoyed two years of comparative stability. But despite its oil wealth, many people live in poverty with limited access to clean water, electricity, healthcare or education.

The root cause of grievances is the sectarian power-sharing system of governance introduced after the 2003 US-led invasion. Many see political elites as subservient to one or another of Baghdad`s main allies, the United States and Iran, who use Iraq as a proxy in a struggle for regional influence.

Protesters are now escalating their tactics, saying civil disobedience is their only recourse and calling for strikes as the government of Prime Minister Adel Abdul Mahdi, in office for a year, has found no response to the protests.

Security forces forcibly dispersed a sit-in overnight in oil-producing Basra but no deaths were reported, security sources said. Thousands have been blocking all roads leading to Iraq`s main Gulf port Umm Qasr, near Basra. Operations at the port, which receives most of Iraq`s imports of grain, vegetable oils and sugar, have been at a complete standstill for a week.

The Umm Qasr blockade has cost the country more than $6 billion so far, Abdul Mahdi`s spokesman said. There were clashes there overnight as the families of protesters killed in previous attempts to disperse the sit-in threw rocks at security forces stationed near Basra port. No deaths occurred, security sources said

Dozens have been arrested in Basra and Nassiriya. In a televised address on Tuesday, Abdul Mahdi said the protests were having an economic impact the country could not afford, and asked demonstrators to refrain from further damaging public and private property.

"He accuses us of sabotaging the Iraqi economy? What Iraqi economy? All we have is oil, and they`re stealing it all anyway," said protester Ayman Abdullah, 38, an engineer.

Oil sales account for over 95% of Iraq`s revenues. Internet remained blocked across much of Iraq on Wednesday, having been completely shutdown late on Monday and briefly restored for less than four hours on Tuesday morning.

The US Embassy in Baghdad condemned the deadly violence against unarmed demonstrators and urged Iraq`s leaders to engage urgently with the protesters.