The continuous apathy of the local government in understanding the will of the people of the region, while forcing its policies on them has resulted in the creation of popular distrust against the local regime. 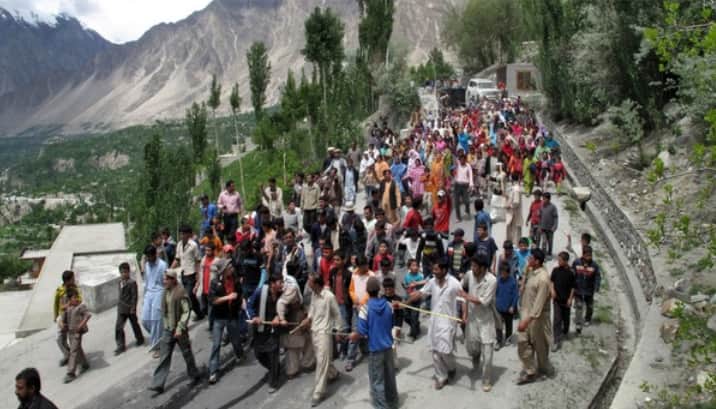 New Delhi: Pakistan occupied Jammu and Kashmir (PoJK) has witnessed mass protests for the past few months over the skyrocketing prices in the region. On January 2, 2021, a grassroots activist from the region, Sairus Khalil was arrested for leading a peaceful protest against the government's inability to control inflating prices.

The arrest of activists has attracted sharp criticism from the journalists and academicians of the region. They bashed the government of PoJK for breaching the rights of dissenting people, many of whom belong to the working class. The government in utter desperation has resorted to silencing the voices asking questions. Economists highlight that the PoJK is facing the worst inflation and unemployment crisis in decades, while the Islamabad sanctioned Prime Minister of PoJK Raja Farooq Haider continues his scripted rant against India.

An op-ed published in the Pakistani newspaper The News, authored by scholar Danish Khan, mentioned that the crippled infrastructure of PoJK and its remoteness has given a cover for Pakistan to disrupt the self-reliant agrarian economy of PoJK. Prior to the Pakistani impositions in the region, PoJK witnessed equal participation of male and female folks in agriculture and related occupations. But the dictatorial policies imposed by Pakistan in the region worsened the matter.

PoJK has been facing the unemployment crisis for the past few decades, which coincided with the Pakistan government's state policy of promoting the exodus of local youth to advance to and seek blue-collar jobs in Gulf countries. The result of this move was a complete disruption of a sustainable agrarian system, which was otherwise resistant to the economic shocks from outside the ecosystem. The condition of families in PoJK can be understood simply by the fact that a majority of them are now dependent only on foreign money from their family members abroad.

This has created a system where the financial infrastructure of the region has coiled around and has become dependent on, the number of employment opportunities available in the Gulf countries. The gradual removal of subsidies from the agriculture sector has dented the pre-existing agrarian ecosystem beyond repair. With the significant cut in the numbers of people engaged in agriculture in PoJK, the agricultural productivity reports have shown PoJK performing very poorly as compared to the performance of Punjab (Pakistan).

Current official statistics of PoJK reveal that 33% of its youth population is jobless. The region has most recently witnessed a dip in the number of jobs for the local youth in the Gulf countries due to the global pandemic of COVID-19.

The Express Tribune reported that the price of 40 kg wheat rose to 2000 PKR which was earlier selling at 1500 PKR, showing a 33.3% increase in the prices. Similarly, the price of 20kg of sugar rose to 1400 PKR from the earlier 900 PKR, showing an increase of 55.5%. The uncontrolled inflation in Pakistan intensifies the doom of the already crippled economy of PoJK, which is at a more disadvantaged position owing to the major part of the region being rural.

The transportation cost of food items to the region of PoJK also adds up to the final value of the food items, thus increasing the price of food products compared to Pakistan. As a result, the residents of the territory end up paying more for the same quantity of food items and goods as compared to other areas of Pakistan.

The protests in PoJK have marked the active participation of marginal farmers and low-end consumers, both of whom have no other means of subsistence. Prior to these protests marking the new year, last year was marked with similar protests as well against both the regimes of Pakistan federation. While the government of PoJK censored a number of media reports on the crisis and discontent, social media painted the true picture of the grim situation there.

A video uploaded on December 17, 2020, on YouTube showcased a mass protest in PoJK, where the people registered their protest against the non-availability of food items and inflation in the region. The people were appealing to the government to take cognizance of the torture and food crisis.

Similarly, on October 15, 2020, the Association of Lady Health Workers from PoJK organized a sit-in protest at Islamabad to oppose the government's inefficiency to control inflation. The pinch of high prices of food materials was felt even by the government employees, as expressed by the Young Doctors Association, an association whose members are victims of Pakistan’s discriminatory employment policies against the residents of PoJK.

The current situation of PoJK presents the true picture of how decades of mismanagement have pushed the region into this turmoil and poverty. The continuous apathy of the local government in understanding the will of the people of the region, while forcing its policies on them has resulted in the creation of popular distrust against the local regime.

Pakistan has from time to time tried to quell the dissenting voices of PoJK. Making hate speech against India, misrepresentation of facts about Jammu and Kashmir, and feeding hyper-nationalist sentiments to the youth of PoJK remain some of the few repetitive dirty tricks in its bag.

The shift in paradigm was unexpected for Pakistan's government when the people of its occupied territory are shedding their fears and beginning to gather and protest against the state’s failures. The rising issues of corruption, inflation, and unemployment in the region have caught the PoJK and Pakistani government off guard