Sushma Swaraj also said that since both girls were minor, they decide if they can convert to another religion. 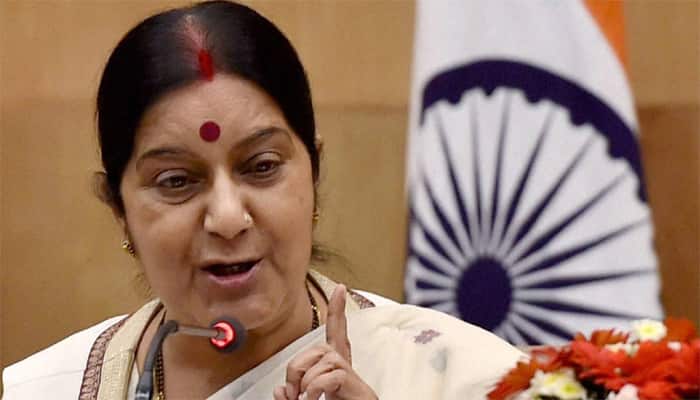 New Delhi: External affairs minister Sushma Swaraj has said that the Hindu girls that were abducted in Pakistan's southern Sindh province should be immediately reunited with their family and since they are minors, they cannot decide if they can convert to another religion.

In a tweet, EAM Sushma said, "Forced conversion of Hindu girls in Pakistan:  The age of the girls is not disputed. Raveena is only 13 and Reena is 15 years old. Justice demands that both these girls should be restored to their family immediately."

Taking a dig at Pakistan Prime Minister Imran khan, Sushma said, "Even the Prime Minister of Naya Pakistan will not believe that girls of this tender age can voluntarily decide about their conversion to another religion and marriage."

EAM and Pakistan's information minister Fawad Chaudhry publically sparred with Sushma over her asking the Indian high commissioner in Islamabad to send a report on the abduction. It had drawn an angry response from the Pakistani minister.

Responding to Pakistani minister's comment on the situation of minorities in India, Sushma had said, "I only asked for a report from Indian High Commissioner in Islamabad about the kidnapping and forced conversion of two minor Hindu girls to Islam. This was enough to make you jittery. This only shows your guilty conscience."

On Sunday, New Delhi sent an official note to Pakistan Foreign Office over the abduction of the two girls in Sindh province, and shared its concern.

Sources said that India called on the Pakistani government to "protect and promote safety, security and welfare of it's own citizens, especially the minority communities."

Sindh in southern Pakistan has a higher percentage of Hindus than rest of Pakistan. Three districts of Mirpurkhas (33% Hindus), Tharparkar (36% Hindus) and Umerkot (49% Hindus) contribute to the significant Hindu community in Sindh and these are the districts where most forced conversion and marriages of underage Hindu girls in Pakistan have been reported.