This is how Donald Trump reacted to Meryl Streep's criticism

Meryl Streep turned a lifetime award acceptance speech at Sunday`s Golden Globe awards into an indictment of Donald Trump`s personality and his tough stance on immigration. 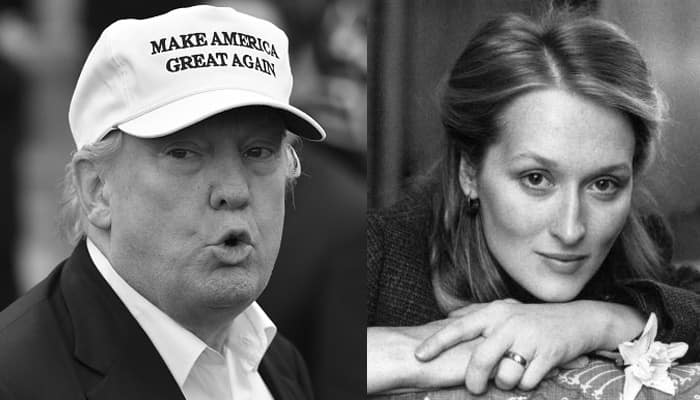 Streep turned a lifetime award acceptance speech at Sunday`s Golden Globe awards into an indictment of Trump`s personality and his tough stance on immigration.

"This instinct to humiliate when it`s modeled by someone in the public platform by someone powerful, it filters down into everybody`s life," the "Sophie`s Choice" actress said, recalling Trump`s imitation in 2015 of a disabled reporter without mentioning the president-elect by name.

Taking to Twitter, Trump said: "Meryl Streep, one of the most overrated actresses in Hollywood, doesn`t know me but attacked last night at the Golden Globes.”

"She is a Hillary flunky who lost big."

Trump also repeated his denial that he had mocked the reporter when he flailed his arms and slurred his speech at a campaign event.

While Streep did not name Trump directly, she used almost the entire speech to criticize his behavior and policies, while calling for Hollywood to stand strong against any attacks and to support a free press through organizations such as the Committee to Protect Journalists.

The audience sat in stunned silence for much of it.

Streep earned a cheer from the crowd when she said that, "Hollywood is crawling with outsiders and foreigners."

"If you kick them all out, you`ll have nothing to watch but football and mixed martial arts, which are not art," she said, as the audience cheered on.

The speech by Streep, who had a prime-time speaking slot at last year`s Democratic National Convention praising Hillary Clinton`s "grit and grace," quickly became the most-talked about moment of the Golden Globes.