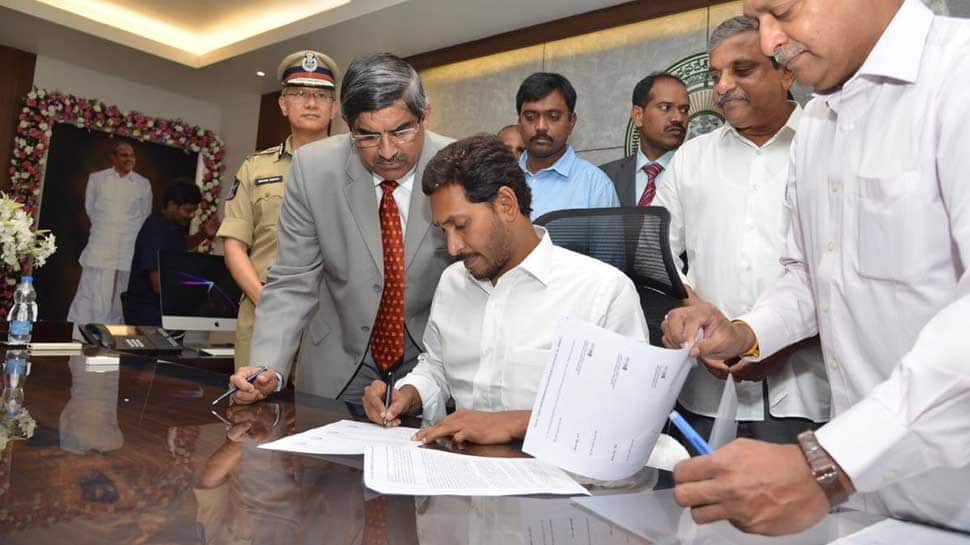 Reddy occupied his office at state secretariat at 8.39 AM.

CM YS Jagan Mohan Reddy stepped into his new office at the Secretariat today, at the auspicious time of 8:39am. God bless his tenure. pic.twitter.com/myqHOlfrhs

Soon after assuming charge of his office, Jagan tweeted that he will work hard to fulfill the expectations of people of Andhra Pradesh.

With God’s and your blessings, I will fulfill your aspirations and live upto your expectations. https://t.co/YX4ccW8tOm

The YSRCP leader was welcomed by the employees of various departments in the Secretariat who stood in queues and welcomed him with garlands and bouquets.

Shortly after that, the Andhra Pradesh Chief Minister constituted his cabinet with 25 ministers being sworn-in here.

Governor ESL Narasimhan administered the oath of office and secrecy to the new ministers, including three women, at a ceremony held near State Secretariat at Velagapudi.

Jagan Reddy, who alone took oath on May 30, constituted his cabinet at one go.

While six ministers had served in the Cabinet of Jagan Reddy's late father YS Rajasekhara Reddy in undivided Andhra Pradesh, all others are first-time ministers.

The swearing in ceremony began at 11.49 AM, the auspicious time set by Jagan Reddy's pundits.

Dharmana Prasada Rao was the first to be sworn-in. Adimulapu Suresh and M Goutham Reddy took oath in English while the remaining ministers took oath in Telugu.

Amjad Basha, the lone Muslim Minister, took oath in the name of 'Allah'.

As announced earlier, five of the ministers will be Deputy Chief Ministers.

In an unprecedented move, Jagan Reddy decided to have five deputies, each from the Scheduled Castes, Scheduled Tribes, Backward Classes, minorities and Kapus.

The names of Deputy Chief Ministers are expected to be announced later in the day.

Sixty percent of the ministers are from SCs, STs, BCs and minorities. There are 11 ministers from upper castes - Reddys 4, Kapus 4, Kamma 1, Vyshya 1 and Kshatriya 1.

Of them Subhash Chandra Bose and Mopidevi Venkatramna were both defeated in Assembly elections. While Bose is a member of Legislative Council, Venkatramna is likely to be nominated to the Upper House.