Of the 20 people, five are said to have sustained serious injuries. 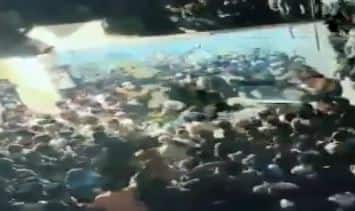 New Delhi: In an unfortunate incident, over a dozen people were left injured after the roof extension of a building collapsed, resulting in people standing atop and fell down with it. The incident took place on late Monday during a Muharram procession in Bandameedi Thandrapadu village of Kurnool district of Andhra Pradesh. As many as 20 people suffered injuries in the incident.

According to reports, the injured were immediately rushed to Kurnool Government General Hospital for treatment. Of the 20 people, five are said to have sustained serious injuries and are being treated at the Intensive Care Unit.

#WATCH Andhra Pradesh: Portion of a terrace collapsed during a Muharram procession, in B.thandrapadu village of Kurnool district, late last night. 20 people injured. They were later taken to a hospital for treatment. pic.twitter.com/k2tPpsouCC

According to information, the villagers had organized an event on the occasion of Muharram. And while people assembled at the function place, some of them were watching from the house rooftops.