CM Reddy announced that Rao will be cremated with state honours and directed the chief secretary to make the necessary arrangements in this regard. 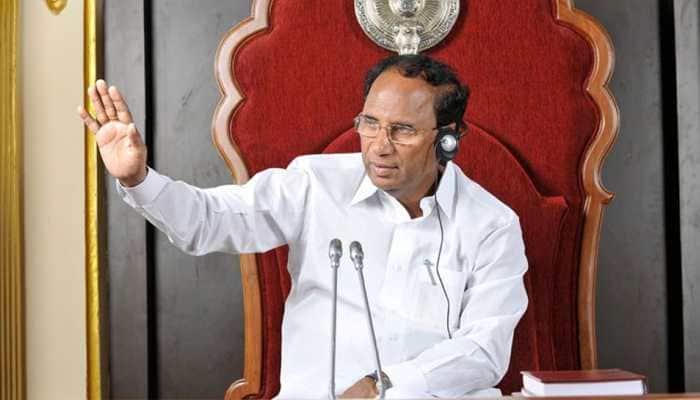 Amaravati: The last rites of former Andhra Pradesh Assembly Speaker Kodela Siva Prasada Rao, who committed suicide in Hyderabad on Monday, will be performed with state honours in his home town Narsaraopet in Guntur district on Wednesday.

Chief Minister Y. S. Jagan Mohan Reddy announced that Rao will be cremated with state honours. He directed the chief secretary to make the necessary arrangements in this regard.

Rao`s son Sivarama Krishna, who was on a visit to Kenya, landed in Vijayawada on Tuesday afternoon. He later left for Narsaraopet.

Braving heavy rain, TDP workers paid their last respects to Rao at different places as the procession entered Guntur district. The body will be kept at the TDP office in Guntur town to enable party leaders to pay homage. It will then be taken to Narsaraopet.

Police have made elaborate security arrangements in Guntur district to prevent any untoward incident. Prohibitory orders have been imposed to prevent any outbreak of violence.

Blaming the YSR Congress Party (YSRCP) government for Rao`s death, the TDP staged protests in Guntur and other districts on Tuesday.

Holding black flags and pictures of Rao, TDP workers took out rallies, raising slogans against the government. They alleged that harassment by the government forced Rao to take the extreme step.

The 72-year-old, who also served as minister in undivided Andhra Pradesh, committed suicide by hanging himself at his residence in Hyderabad on Monday. The family members told the police that he was under stress.

Terming this as a murder by the government, Chandrababu Naidu demanded a probe by the Central Bureau of Investigation (CBI). He told reporters in Hyderabad that the government of Y. S. Jagan Mohan Reddy humiliated Rao and harassed him physically, mentally and economically, leading to his death.

"Such an incident has not happened anywhere in the country. Never before a senior leader like Kodela committed suicide due to harassment by the government," said the former chief minister.

Naidu said Jagan Mohan Reddy, who was charge-sheeted by the CBI for corruption to the tune of Rs.43,000 crore, got a case booked against Rao in connection with furniture valued at just one or two lakh rupees.

The TDP chief was referring to the case against Rao for allegedly diverting Assembly furniture.

Rao and his son Sivarama Krishna were last month booked by Andhra Pradesh police for allegedly diverting Assembly furniture to unauthorized premises. Some furniture was recovered from a motorbike showroom of Sivarama Krishna in Guntur.

The YSRCP rubbished Naidu's allegations that harassment by the government drove Rao to suicide. YSRCP leader and Government Chief Whip G. Srikanth Reddy alleged that Naidu is playing politics over the death.

He pointed out that a member of Rao's family has lodged a complaint with the police that a dispute in the family led to his death.