The accident occurred near Biodiversity Park intersection when the car lost control and hurled down from the recently-opened Biodiversity flyover, crushing a woman waiting on the footpath. 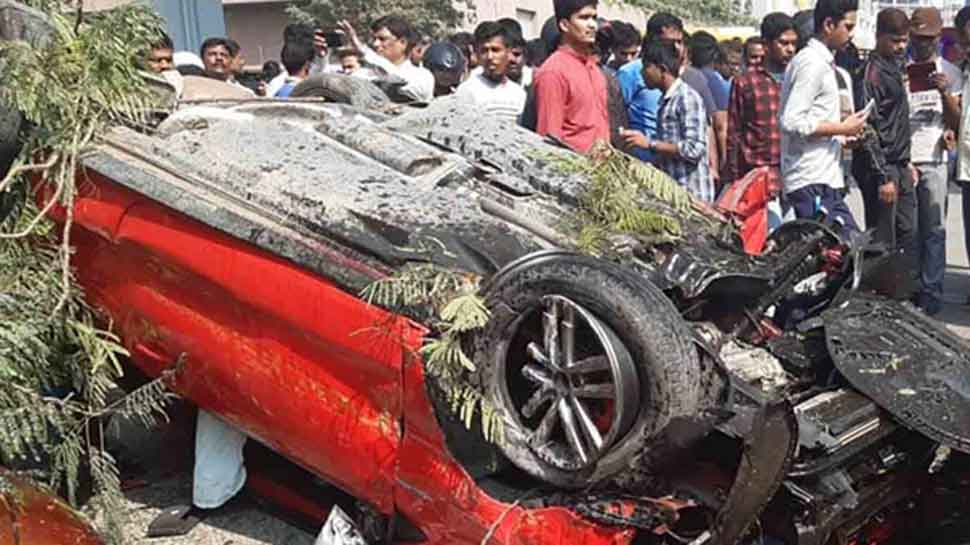 Hyderabad: A woman was killed and two others injured when a car fell off a flyover in Hyderabad's information technology corridor Gachibowli on Saturday, police said.

The accident occurred near Biodiversity Park intersection when the car lost control and hurled down from the recently-opened Biodiversity flyover, crushing a woman waiting on the footpath.

CCTV images show the car falling on the road and then crashing into a tree. A woman, who was waiting for an autorickshaw, was crushed under the vehicle. The car driver and another woman on the ground were also injured in the accident.

Such was the impact of the collision that the tree was uprooted and the car dragged on for several yards, damaging few vehicles parked by the roadside. The images show several people, who had narrow escape, running in panic while some passersby stopping to help the injured.

The injured were admitted a nearby private hospital, where the car driver`s condition is stated to be critical.

The deceased woman has been identified as Satyamma, a resident of Manikonda area. Greater Hyderabad Mayor Bonthu Rammohan announced an ex-gratia of Rs 5 lakh for her family.

Cyberabad Police Commissioner VC Sajjanar told reporters at the accident site that the car was being driven at a speed of 99-104 km and the person driving the car lost control of the vehicle at the curve. He advised motorists not to drive the vehicles at a speed of more than 40 km.

This was the second disaster on the flyover, which was inaugurated earlier this month, connecting the busy IT corridors of Gachibowli and Hitec City.

Two youth were killed when a car hit them on the same flyover on November 9. The youth, who had stopped to take selfies, fell of the bridge after the car being driven by a man in an inebriated condition hit them.

Road users complained that the sharp curve on the flyover is leading to accidents. The Police Commissioner said they would take necessary safety measures but appealed to people to drive cautiously and not to cross the speed limit.