Our air force was ready but it was night and dark: Pakistan Defence Minister on IAF airstrikes 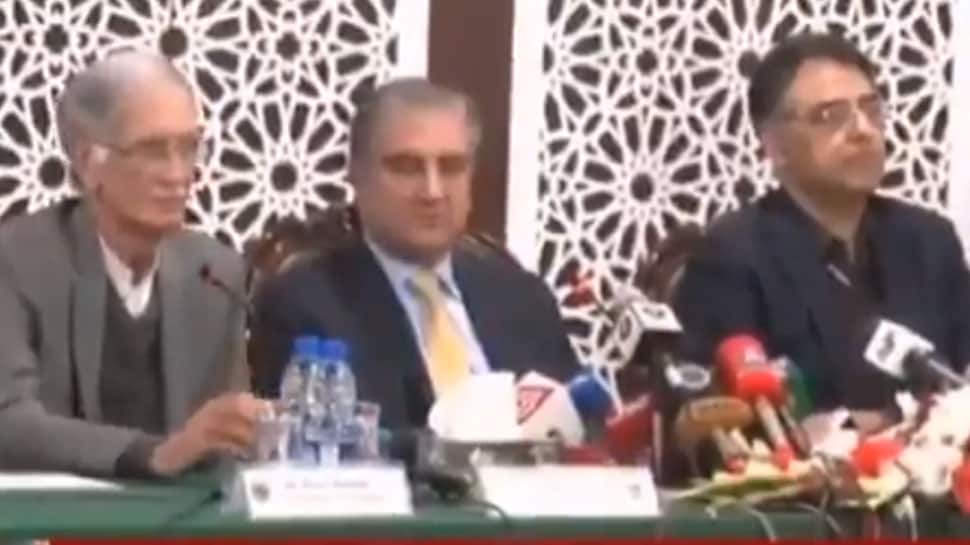 ISLAMABAD: Bombarded with questions over the country's failure to give a strong response to the pre-dawn airstrikes carried out by the Indian Air Force in Balakot, one of its top ministers on Tuesday said that the 'battle-ready' Pakistan Air Force could not react as it was very dark.

As the Pakistani establishment sought to downplay the IAF raids on Jaish-e-Mohammed terror camp in Balakot, a Pakistani journalist shared a video of Pakistan's Defence Minister Pervaiz Khattack in which he could be heard saying that the Pakistan Air Force could not respond since it was very dark and night.

This is the Defence minister of Naya Pakistan: "Our air force was ready but it was dark.." Guys, ghabrana nahi hai. #okbye
pic.twitter.com/QqNYU7QoCI

Pervaiz Khattack made these remarks while addressing a joint press conference with Foreign Minister Foreign Minister Shah Mahmood Qureshi during which the two promised a strong response to India over IAF's action.

Responding to questions, Qureshi claimed that "multi-dimensional intrusion" was attempted by the Indian jets. "But the intervention by Pakistani jets forced them to return back within minutes."
He dismissed the notion that Pakistan Air Force (PAF) jets were late in responding to the Indian attack, saying PAF jets were "ready" and "air-borne."

Flanked by Defence Minister Pervaiz Khattack and Finance Minister Asad Umar, Qureshi dismissed Indian claim of destroying terror camps of banned JeM in Balakot. "There was no presence of any such camp(s)," he asserted.

"Do not underestimate us. We have our own sense of timing and we will act and react. Pakistan will do what Pakistan should do," he said and added, "we will not disappoint the people of Pakistan."

He also said that he has spoken to the foreign minister of the UAE and expressed Pakistan's reservations for inviting Indian foreign minister as chief of guest in the OIC meeting scheduled early next month.

Qureshi faced tough questions from journalists forcing him to end his media interaction abruptly. When a journalist asked Qureshi to tell as to why a "well-prepared Pakistan Air Force could not hit a single intruding Indian aircraft", Qureshi chided him, "you are a Pakistani and respect the ability of the Pakistan Air Force. Escalation was not our purpose."

When another journalist asked him to comment on India's claim that the JeM camps were destroyed by the Indian jets Qureshi taunted saying "you shouldn't put such questions."

Pakistani establishment strongly rejected India's claim of targeting terrorist camp in the country and causing heavy casualties even as it vowed to respond "at the time and place of its choosing" and raise the issue at the United Nations and other international forums.

At a hurriedly called special meeting of the National Security Committee (NSC) hours after India's air strikes inside Pakistan, Prime Minister Imran Khan asked the armed forces and the people of his country to remain prepared for "all eventualities."

At least 12 Mirage 2000 fighters of the IAF bombed and destroyed Jaish-e-Mohammed's (JeM) biggest training camp in Balakot in Pakistan's restive Khyber Pakhtunkhwa province, about 80-km from the Line of Control (LoC), early Tuesday, killing a "very large number" of terrorists.

The air strikes came 11 days after the JeM carried out a suicide attack in Jammu and Kashmir's Pulwama district that killed 40 CRPF soldiers.

The Pakistan Army later confirmed that Indian jets dropped "four bombs" during an operation on Tuesday but downplayed its significance, saying the Indian attack was repulsed and while going back the aircraft "jettisoned their payload."

Army spokesman Maj Gen Asif Ghafoor also said that Pakistan will "surprise" India with its response that will be in all domains including "diplomatic, political and military."

"We will surprise you and wait for the surprise. Our response will come and it will be different."Our response will be in all domains including diplomatic, political and military," the General added.