Protests against Citizenship Bill continue in Northeast, ULFA threatens to pull out of peace talks

The pro-talk faction of ULFA has threatened to walk out of parleys with the Cente. 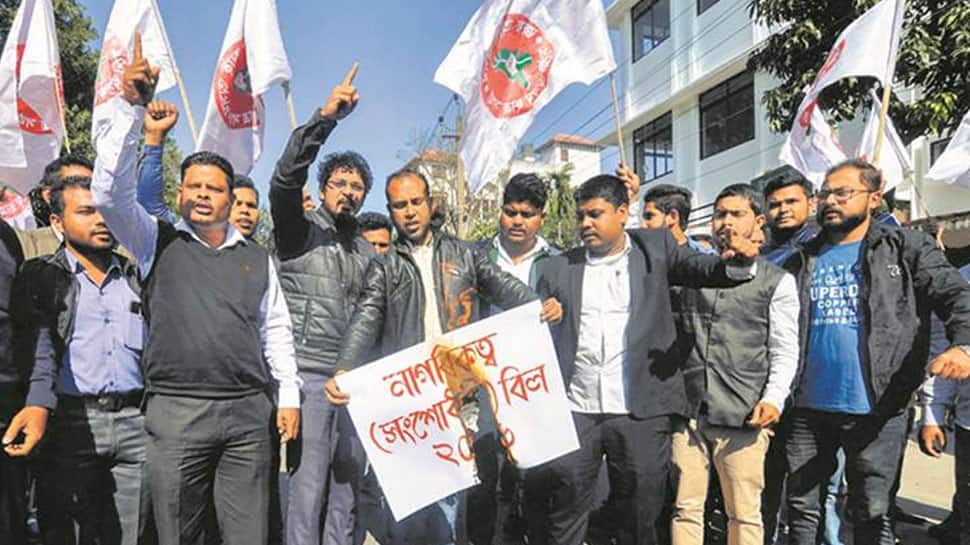 IMPHAL: The ongoing protests against the controversial Citizenship Amendment Bill, 2016 have intensified in the Northeastern states with shutdown called by various outfits crippling normal life and vehicular movements across the region in the past few days.

From Assam, the protests against the controversial bill have now reached Manipur where six student organisations had called a bandh on Saturday.

AMUCO president Ph Devan said that the bill will uproot the existence of indigenous people of the Northeastern region of India.

He further appealed the CSOs and political parties to come together to fight against the bill.

Another protest rally against the bill was also held at Wangoo area in Manipur's Bishnupur district.
Workers of National Students' Union of India (NSUI), Manipur state and Manipur Pradesh Youth Congress Committee staged a protest demonstration against the bill at the heart of Imphal city and they also submitted a memorandum to the Governor of Manipur, Najma Heptulha.

The bill seeks to amend the Citizenship Act, 1955 to grant Indian citizenship to Hindus, Sikhs, Buddhists, Jains, Parsis and Christians, who fled religious persecution in Bangladesh, Pakistan and Afghanistan and entered India before December 31, 2014.

The North East Students' Organisation (NESO), a conglomerate of students' bodies of the region, also observed 'Black Day' in neighbouring Assam to protest firing in Tripura during the bandh against the Bill on Tuesday.

The pro-talks faction of the United Liberation Front of Asom (ULFA) has threatened to pull out of the ongoing peace parleys with the Centre on Saturday if the controversial Citizenship Amendment Bill was passed in Parliament.

Besides, a government lobby was backing certain people to fan communalism among the Assamese and Bengali-speaking people of Assam, it claimed.

"The ongoing peace talks are likely to be discontinued if the Centre goes ahead with the citizenship bill, against which protests have erupted in Assam with all sections of the society participating in the agitation," prominent ULFA leader Mrinal Hazarika told reporters here.

The issue was raised on the organisation's platform that the talks would be redundant if the bill was passed, he said.

Head of the Centre-appointed panel for Assam quits

M P Bezbaruah, who was appointed as the head of a Centre-nominated committee to assess the implementation of Clause 6 of the Assam Accord, has declined to be a part of it, leaving the nine-member body in the lurch.

Bezbaruah is the fifth member to leave the committee. He has written to the Union Home Ministry in this regard.

The development comes close on the heels of four members-- eminent litterateurs Nagen Saikia and Rong Bong Terang along with educationist Mukunda Rajbongshi and the nominee of the influential All Assam Students Union-- deciding not to be a part of the committee.

The committee was formed on January 6 to assess the quantum of seats to be reserved in the Assam Assembly and in the local bodies of the state for Assamese, besides providing other safeguards.

Clause 6 of the Assam Accord states "constitutional, legislative and administrative safeguards, as may be appropriate, shall be provided to protect, preserve and promote the cultural, social, linguistic identity and heritage of the Assamese people".

The bill seeks to amend the Citizenship Act, 1955 to grant Indian citizenship to the Hindus, Sikhs, Buddhists, Jains, Parsis and Christians, who fled religious persecution in Bangladesh, Pakistan and Afghanistan and entered India before December 31, 2014.