Congress on Sunday released its fifth list of three candidates who will be contesting in the upcoming Jharkhand assembly election, taking the total number of candidates announced till now to 30.

RANCHI: Congress on Sunday released its fifth list of three candidates who will be contesting in the upcoming Jharkhand assembly election, taking the total number of candidates announced till now to 30.

Sona Ram Sinku has been fielded from Jaganath ST assembly seat while Suresh Baitha, who will be contesting the poll in place of Rajiv Kumar has been given a party ticket from Kanke SC. Sunny Toppo will contest from Mandar assembly seat. 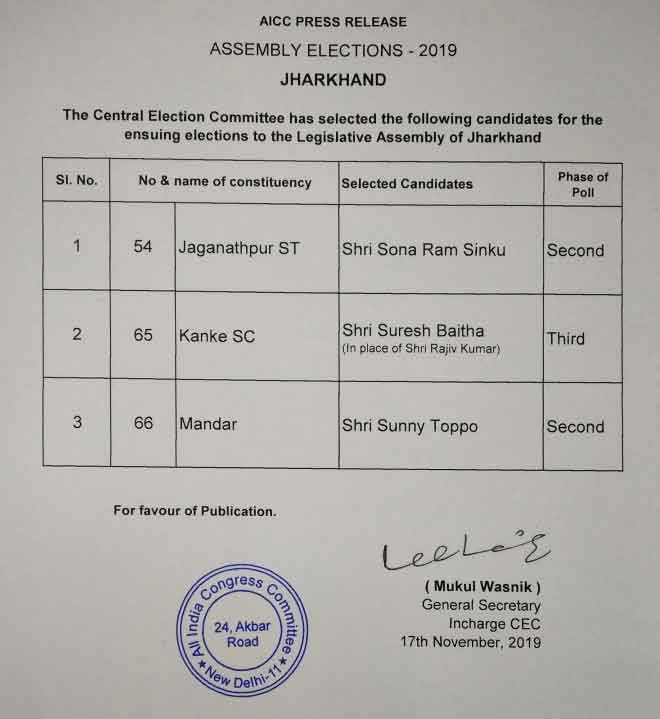 Congress on Saturday released its fourth list two candidates who have been given a party ticket for the upcoming assembly poll in Jharkhand, scheduled to take place in five phases starting November 30. The counting of the votes will take place on December 23.

National spokesperson of Congress Gourav Vallabh has been fielded against Jharkhand Chief Minister and BJP leader Raghubar Das from Jamshedpur East assembly seat for the upcoming Assembly elections in the state. Further, Mamta Devi will contest from Ramgarh constituency from a Congress ticket.

Earlier on Monday, Congress announced its third list of 19 candidates for the Jharkhand assembly polls.

Among those fielded by the party in the third list include Alamgir Alam from Pakur, Irfan Ansari from Jamtara, R C Prasad Mehta from Hazaribagh, Sanjay Singh from Bokaro and Mannan Mallick from Dhanbad.

On Sunday (November 10), the party had released two lists of five candidates and one candidate.

The Congress will contest 31 seats out of 81 seats in the Jharkhand assembly.

The RJD will contest on seven seats, while the largest chunk of the alliance share has gone to the JMM, which will contest elections on 43 seats.