Among the top 10 most popular cars in India, Maruti Suzuki takes eight spots in the list giving space to only two other brands, namely Hyundai and Tata Motors.

Recovering from the pandemic, the auto industry has witnessed growth in sales numbers in the month of May compared to last year. However, following the usual tradition, Maruti Suzuki stays on top in terms of sales. Moreover, the hatchbacks from the Indian carmaker take the top spots in the sales chart. Although they are still facing severe competition from the Compact SUV segment and MPV represented by Tata Nexon and Maruti Suzuki Ertiga, respectively. Looking at the last month's numbers, these are a bit drastic changes as Ertiga has moved down quite a few ranks.

Based on the last month's sales number, WagonR, the tallboy hatchback, has taken the top spot in the list of most sold vehicles clocking 16,814 units, showing a YoY growth of 706 per cent. The second most sold vehicle in India became a compact SUV in the form of the Tata Nexon, projecting the growing love of Indians for the segment. The SUV sold 14,614 units which, compared to last year has witnessed a growth of 127 per cent in the Indian market. 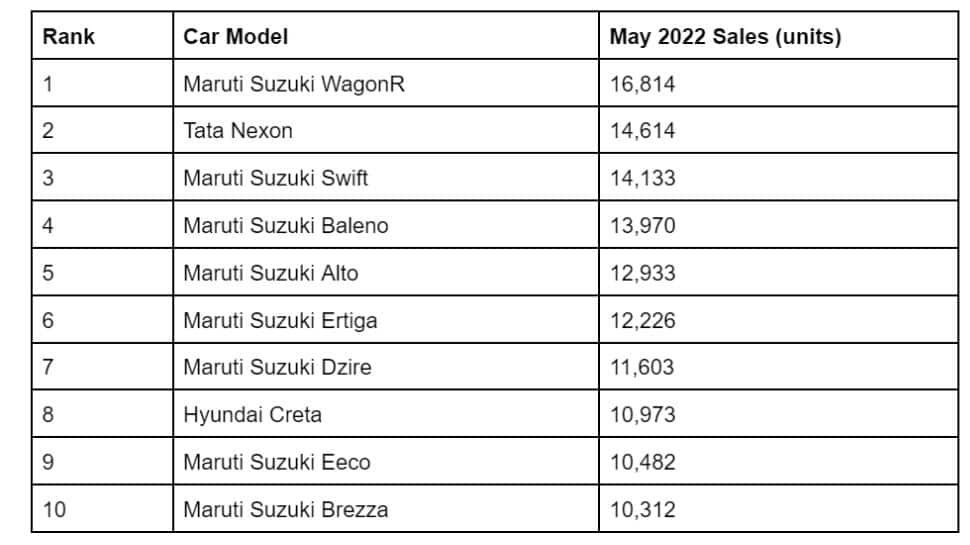 Moreover, in recent months, the growing popularity of compact SUVs in the Indian market has started projecting in the numbers. Among the top 10 models sold in India, three top spots are held by SUVs. Besides Nexon, Hyundai Creta and Maruti Suzuki Vitara Brezza are in the ranks in eighth and tenth positions, respectively. Hyundai Creta sold 10.973 units, while Maruti Suzuki Brezza sold 10,312 units.

Moving on, hatchbacks hold the third, fourth and fifth ranks on the list. Interestingly all three of them are Maruti Suzuki cars, namely Swift, Baleno and Alto, selling 14,133 units, 13,970 units and 12,933 units, respectively. Following the hatchbacks, Maruti Suzuki Ertiga takes the sixth position with 12,226 units sold in the month of May.

It is to be noted that out of the top 10 cars sold in India, 8 are Maruti Suzuki's models showing the automaker's dominance in the Indian market. Moreover, out of these top-selling cars, 4 are hatchbacks.