A success story for Maruti Suzuki, WagonR has been a timeless classic over the last 20 years in India. In its latest form and feel, however, the ageing warhorse mounts makes yet another shot at glory.

Udaipur: In the 20 years since it was first launched in India, Maruti Suzuki managed to sell 2.2 million units of the WagonR. According to the company, 24% of all opting for the car are second-time buyers which further shows the trust that the car enjoys in the country. In fact, the WagonR has managed to hold its own at a time when SUVs - compact or otherwise - have been selling like hotcakes. To ensure that the car does not lose its position of relevance, Maruti Suzuki has brought in the 2019 edition with several design changes on the outside, an updated cabin and an upgraded engine with the option of AGS transmission.

Are these enough to ensure that the WagonR - a veteran in the industry - can continue to battle past newer entrants? Zeenews.com took a test drive to find out.

In the eyes of the beholder

In its latest re-birth, the car essentially retains the same design DNA but Maruti has managed to incorporate several changes on the outside that gives it a contemporary flair. This is best highlighted by how the new WagonR appears from the front where blade-like chrome inserts on a re-worked grille are flanked on either side by dual-split headlamps. The new fog lamps are encompassed in a spotlight-like housing while the hood has svelte lines on the extreme ends for a tad of visual purpose in a car that now has a wider stance. 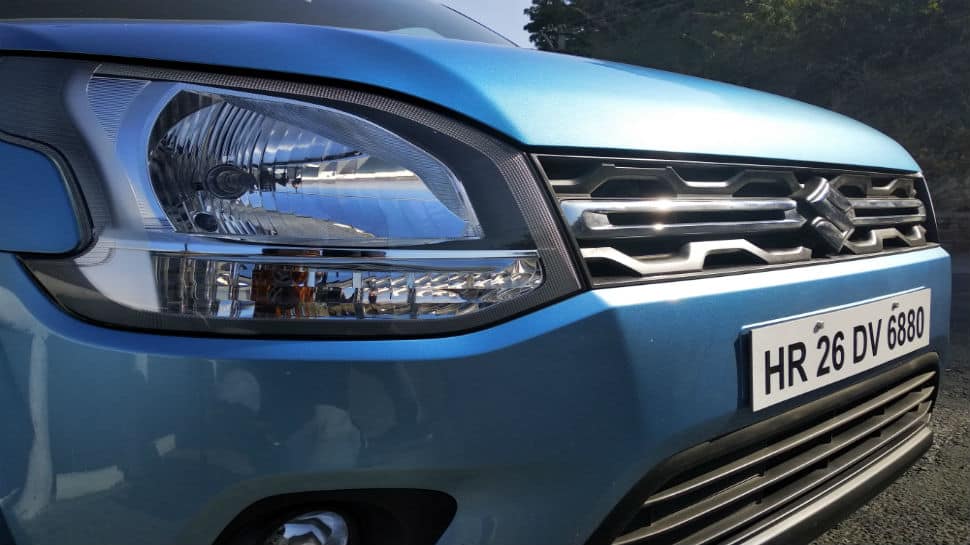 From the side, the svelte lines mentioned previously make an entry over the flared wheel arches while the floating roof is a step in the right direction. And at the back, the tall taillights go well with the overall design language here. Importantly however, the glass space here could have been a bit wider for both aesthetic as well as practical purposes. 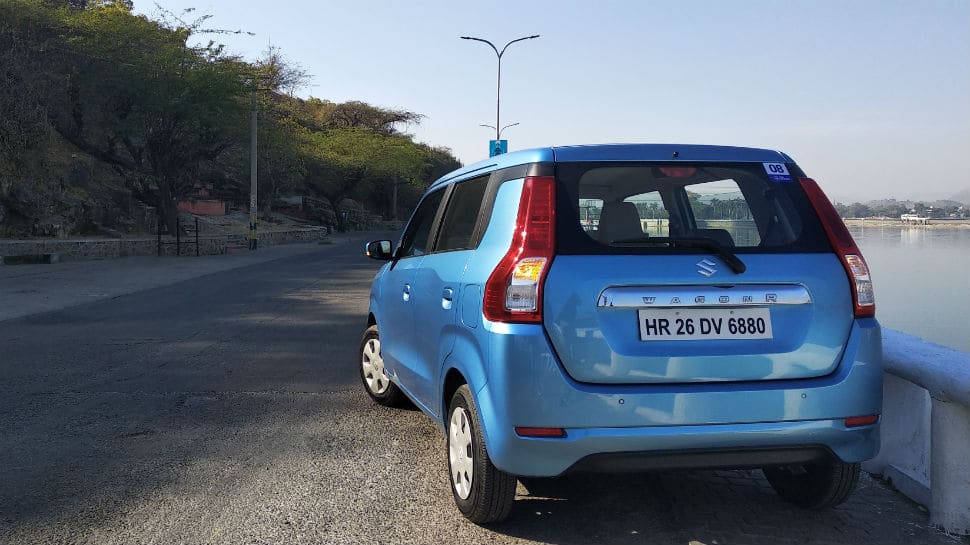 At 3,655mm in length, 1,675mm in height and 1,620 in width, the new Wagon R pushes its dimensions a bit further and the design changes mostly gel well together in a package that still retains its inherent boxy genetics.

The feel of it all

Unlike on the outside, the cabin of the WagonR is a whole new playing arena where most of what the car has had in the last two decades have been swapped for relevance in current times. While there still is ample space for four to five passengers, there are a host of design changes and feature additions that truly define the upgrades made.

The floating dash with multi-finish accentuated AC vents also houses a 17.78 cms infotainment screen - on the top variant - which has a plethora of features that addresses the need of the next-gen buyer. The company has equipped the car with Android Auto, Apple CarPlay and satellite radio while occupants now have the additional option of streaming music and podcasts while on the move. Want your daily dose of news? Done. What's the score in cricket? Two taps on the screen and it's taken care of by what the company calls 'Smartplay Studio.' The system connects to Cloud-based services to provide entertainment and essential - navigation, drive details etc - information to the occupants. There is also a Smartplay app that can be downloaded on both Android and Apple platforms which can then be used by passengers at the rear to control the infotainment screen with. 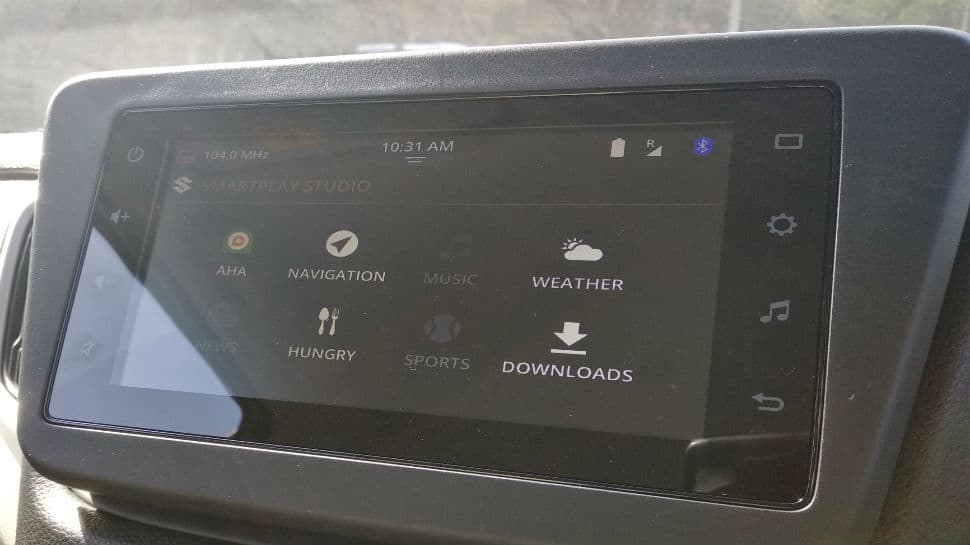 Then there is a brightly coloured instrument cluster behind the steering which provides the absolute drive-related details.

The cabin itself continues to have a large window area that has defined WagonR with adequate leg space at the rear and generous headroom all around.

What doesn't work all that well though are the light-coloured seats stain quite easily while not offering much support - lumber or thigh - for long journeys. While they may suffice for city drives, passengers making long-distance trips aren't likely to appreciate what they have to plant themselves on. Yet another downer in the car are some of the plastics used which take away some of the sheen from all that is new on the inside in the car.

Up and on the move

The new WagonR comes with two engine options - the three-cylinder 1.0-litre engine with performance figures of 68PS and 90Nm torque, and an all-new 1.2-litre petrol which belts out 83 PS and 113Nm. While the 1.0-litre option is considerably cheaper and performs on expected lines, it is the more powerful engine that demands attention.

In this test drive, both the manual as well as the new AGS options were driven.

In the manual transmission option, the car moves with more purpose than before courtesy the more powerful engine under the hood. The switch is not just a detail but can actually be felt when pushing the WagonR forward. It still may not win drag races but then the WagonR still doesn't aspire for racing glory. Instead, it moves steadily in congested roads and picks pace reasonably well on the highway. Overtaking moves would still require planning despite smoother shifts but triple-digit speeds are possible with more ease when compared to the familiar 1.0-litre option.

At high-speeds though, there is considerable noise creeping into the cabin even though Maruti claims it has worked on bringing down NVH levels. This is especially true on less than perfect roads where debris clanking off the tyre arches are audibly disconcerting.

Another area where there the scope of improvement has been left rather blank is the amount of body roll on sharp turns. And there's plenty of it. While the car itself makes sharp turns with reasonable ease thanks to a light steering, the body roll is extremely prominent and rather jarring. On the flipside, the car manages to tackle road bumps well and keeps things composed - especially on straight patches.

All of these are obviously true in the AGS option as well but the fact that there is the added convenience of bidding farewell to the clutch is a welcome move. Maruti is increasingly using the AGS technology in its newer cars and having it in the WagonR - a car likely to put in majority of its miles within city limits -  may well be the clincher for the car. The shifts are near-precise and almost as smooth as in the manual transmission variant which basically translates into sheer driving comfort during urban commutes.

That airbags for the driver and front passenger come as standard across variants is yet another plus while Maruti claims that because the new WagonR is based on its fifth-generation HEARTECT platform, it is also safer for occupants in case of a crash because of the high tensile steel used.

The long and short of it all

At a starting price of Rs 4.19 lakh (ex showroom price in Delhi for the base 1.0 L option), the new WagonR remains a strong contender for first-time buyers. Those on a rather tight budget would do well sticking to the less powerful engine which also gets the AGS transmission option. For others who would prefer a peppier drive, the 1.2 litre engine could well be the option to go for.

The 2019 WagonR manages to retain what has worked well for it over the past many years - spacious cabin and a reliable engine. It then builds upon it by adding design changes and a feature-rich cabin alongwith the option of a more powerful engine and AGS option. It makes a strong case for itself at a price point at which it would go up against the Celerio - its sibling, Hyundai Santro, Tata's Tiago and Datsun Go.